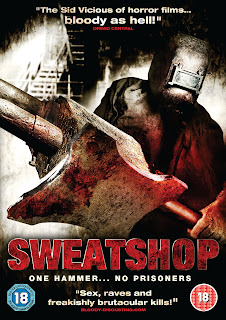 Charlie has a reputation as the promoter of the hippest and edgiest Dark Wave parties in town. In an enormous vacant warehouse situated on the edge of the city, she and her friends gather to set up an explosive rave without attracting unwanted attention. But someone, or something, is already watching… Unknown to the fun-seeking ravers, an inhuman beast resides within the confines of the warehouse armed with a mammoth weapon that serves only one purpose: to end the lives of those who trespass within its lair. Charlie had hoped this party would be the best she’d ever thrown – now it looks like it may be her last!

Another month, another straight to DVD ‘torture-porn’ flick featuring the innards of poorly developed characters getting sloshed across our screen. Sweatshop is by far one of the most rudimentarily scripted of the bunch. It also boasts some of the most inexcusable characters in recent memory, but it somehow manages to set itself slightly apart from the pack with a number of interesting twists; notably the gruelling effects, monstrously hulking killer and moodily throbbing electronic score courtesy of Dwayne Cathey. While it also features a number of nicely staged death scenes – even managing to work some suspense into the mix – Sweatshop still suffers from uneven pacing and takes too long to get going. Director Davidson substitutes slow-burning tension for endless scenes in which annoying characters - who all resemble drop-outs from a gritty cyber-punk movie - bitch at each other, talk about/give blowjobs, fuck each other and then bitch at each other again. The film at times resembles an overly long music video, with loads of scenes of the aforementioned annoying characters dancing around in slow-motion, sucking lolly-pops and pouting ‘seductively’ from under the copious dry-ice while moody dance music blasts out. It’s only whenever the frequency of the murders increases that we get any semblance of momentum or suspense. 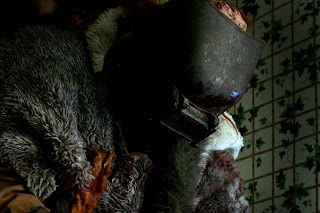 One of the film’s merits is without a doubt the jaw-dropping spectacle of the killer. A downright formidable chap, he is decked out in animal furs and welding mask, and sports a hammer to make even Thor go weak at the knees. He is an unusual and grotesque figure and adds a real edge to the film. He has a couple of demonic looking minions too and their look appears to have been heavily influenced by Lamberto Bava’s Demons; all bulging eyes, contorted movements and toothy snarls. Indeed the influence of Italian horror is evident throughout Sweatshop; in the stylised lighting and colour palette, extreme-violence, highly moody location and somewhat convoluted screenplay.

The violence in the film is beyond brutal: skulls are crushed into walls, limbs are bound in barbed-wire, jaws are ripped off, intestines are yanked out, legs are mangled and crunched to bloody pulps and throats are slit wide open. The mal-developed characters and epilepsy-inducing editing lessens the impact somewhat, but there are some images here that will sear themselves into your head. Once we’ve finally limped to the finale, the sight of the hulking killer dispatching various ravers on the crowded dance floor should further satisfy gore hounds and echoes similar scenes of carnage on the dancefloor in Blade, Beyond the Rave and Freddy vs Jason. 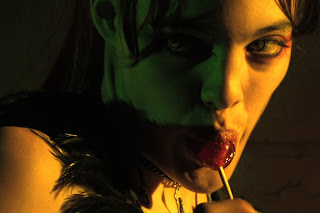 James Gracey said…
Hey, thanks so much for dropping by and leaving a comment. Are you guys working on anything at the moment? Hope you’re well. Keep up the fiendish work! :)
11 December 2011 at 23:00