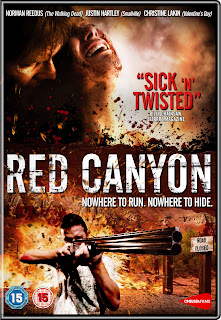 Several years after experiencing a traumatic event in their hometown, siblings Regina and Devon, along with a few of their friends, go back to sell off their late mother’s house. Ever since the incident took place, Regina has experienced flashbacks and is easily spooked. In order to face her fears, she returns to the nearby cave where the horror first began. Little does she know, what she discovers there will only worsen her deep-rooted terror, as a brutal assailant begins to shoot, slice, chop and stab his way through her friends…

At the heart of Red Canyon is an interesting premise. The idea of returning to a place from childhood that was the source of great trauma is one pregnant with dark promise. Intrigue is established early on, particularly through Regina’s flashbacks scattered throughout the narrative, and while director Rodriquez’s direction exhibits a number of deft moments, the befuddled screenplay tends to detract from what should be a compelling momentum. The story plods on in fits and bursts, tension is never sustained for long, and eventually things just get too muddled. What should have been a powerful revelation that cuts to the core and cripples with its unveiling, just sort of happens without any impact. 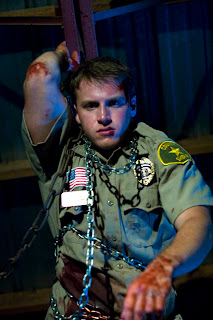 The characters are never really given much to do, and they just seem to run around from one place to the next, getting killed as they go. Aside from Terra (Katie Maguire) who seems to be the only gutsy, resourceful and likable character, no one else is worth bothering to root for. Even our intrepid heroine Regina (Christine Lakin) appears weak, whiny and selfish. Norman Reedus plays a more unappealing version of his character in The Walking Dead and saunters through proceedings, swigging whiskey, shooting stuff and just generally being a bit of a red-necked badass.

A couple of well executed chase scenes – including one with a ravenous dog – inject some life into proceedings, and one or two creepy moments hint at ambiguity and intrigue momentarily; Are the siblings carrying out the grisly deeds? Having experienced that trauma all those years ago have they finally snapped by returning to where it happened? Some of the night scenes in the desert are highly atmospheric and there are a couple of well-timed scares. Robert Filomena’s moody guitar based score and Sonnel Velazquez’s cinematography enhance the lonesome beauty of the landscape and desolate setting, but the stark isolation the friends find themselves in is never exploited as much as it could be. 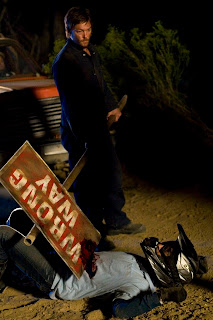 More often than not, the muddled narrative renders it an uneven and eventually tedious affair. The downbeat and thoroughly depressing ending just works to rub salt in the wounds, rather than create a dramatic sting. Don’t get me wrong; I can appreciate downbeat endings if they wield enough power to haunt the viewer – The Mist, anyone? Whereas it and films of its ilk had the tenacity to create a real impact through an astounding denouement - thanks to good writing, engaging stories and characters to give a shit about - Red Canyon doesn’t quite cut it. This is a shame, because at its core is a genuinely nasty, mean and moody idea which lacks the powerful execution to make it truly effective.

The Man-Cave said…
Sounds like it had promise, but execution failed. And if you are going to have a downbeat ending, put extra emphasis on the characters so we will feel the pain that makes a downer ending work.
22 May 2011 at 15:40

James Gracey said…
Yeah Geoff, it had promise and was mildly entertaining in parts, but it just never got going or became in any way involving. The nasty ending would have been so much more powerful had the journy to it not been so, for want of a better word, 'meh.'
22 May 2011 at 20:09