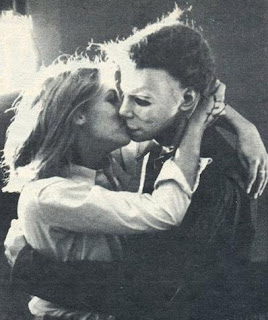 You bet Michael’s around here somewhere – everywhere, in fact. That’s because this month (what with it being October and Halloween and all) is totally Halloween Month at Behind the Couch.

I thought it would be a totally good idea to watch all ten Halloween films (including Rob Zombie’s remake and its sequel) in the lead up to All Hallow’s Eve this month. Okay, I may have totally been drinking and watching Halloween H20 for the first time in ages when I had this brainwave, but hey, these things just have to be done sometimes.

John Carpenter’s seminal slasher classic Halloween set a benchmark for horror throughout the Eighties. An excruciatingly taut exercise in suspense and fear, Carpenter’s film relied on ‘less is more’ suggestiveness to create an atmospheric chill-fest that still proves highly effective today. Arguably the benchmark it set would go on to consist of ever more exploitative violence and diminishing quality in the slasher movies it inspired throughout the Eighties (including the film’s own sequels, sadly). That’s hardly Carpenter’s fault though. His low budget chiller was, at the time, the most successful independently produced film of the era. Its influence is still evident in horror today and the slasher craze it ignited in the Eighties would be rekindled in the Nineties by Kevin Williamson’s Scream – a post-modern love letter to Halloween and the myriad stalk and slash films it inspired.

So, have your Jack-o'-lantern and your William Shatner mask at the ready, refill your glass, and totally join me, if you will, on a bloody trek back to Haddonfield, Illinois; to where all the fun began…

And don’t forget to totally forget your chemistry book and your math book, and your English book, and your, let's see, your French book, and... Well, who needs books anyway, we don't need books; we’ve got Halloween movies to watch! I mean, it doesn't really matter if you have your books or not... Hey isn't that Devon Graham?

Halloween is a great film, and it rightly deserves its iconic status.

Sounds like an awesome month ahead here! Well, Zombie's films aside.

Jenn said…
Awesome, James! Are you going to overlap these viewings with the blog-i-verse-wide October Horror Movie Challenge?
1 October 2011 at 06:11

Wes said…
Fantastic stuff James, I look forward to it. It's always nice to get a fresh perspective on the sequels - I could never understand why Season of the Witch was considered so disposable - it was always one of my favourites, and even though conventional wisdom says I'm just plain wrong - I do like the Rob Zombie films much more than the later sequels...
1 October 2011 at 08:19

Aaron said…
Awesome! Looking forward to your reviews. For years I defended HALLOWEEN 4 and 5.

James Gracey said…
@Joe – Yeah, I’m hoping it will indeed be awesome! It’s been a while since I’ve watched any Halloween films, and what with it being October and all (and the fact that I *may* have been slightly inebriated) – it seems fairly appropriate.

@Jenn – I love the idea of a blog-i-verse-wide October Horror Movie Challenge, but alas, I just don’t think I’ll have the time to blog everyday throughout the month. I know, I know; LAME! Looking forward to reading your daily horror film reviews though. Hope you’ve stocked up on the red stuff. ;)

@Madelon – You *should* like, totally, join in! There’ll totally be pumpkin carving and wine and candy and wine and Halloween movies and wine! Did I mention wine? If memory serves me correctly, I’ll need some to get through some of the later sequels… ;)

@Wes – It’s been a while since I saw Halloween III, but I remember always liking it and having a soft spot for it. I liked the fresh angle. And the crazy Oirish toy-maker. And Tom Atkins!! Also, I believe the Rob Zombie films are not without their merits. Stay tuned!

@Aaron – Hee hee. I’ll look forward to hearing what you think of Halloween 4 and 5. Like I said, it’s been a while since I watched them so it’ll be good (I hope) to revisit them. I like the opening credits of part 4. I seem to recall the rest of the film being disappointing though. And I totally don’t remember much of part 5. Except the allusions to Bride of Frankenstein with Myers being revived and nurtured by a hermit in the woods.
1 October 2011 at 12:23

Shaun Anderson [The Celluloid Highway] said…
That time of year again is it? Time for me to find some horror films all the fans like and slag them off I think.
7 October 2011 at 17:15