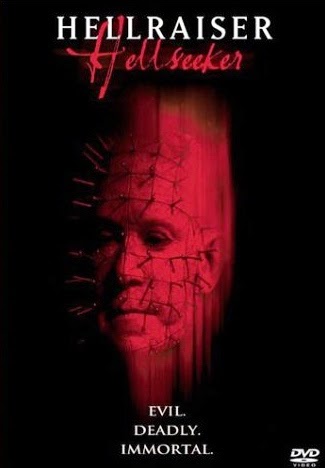 When she and her husband are involved in a horrifying car crash, Kirsty Cotton is declared missing and presumed dead. Her husband Trevor, a shady businessman, attempts to piece together the details of the crash in an attempt to find her. Suffering from severe head injuries, amnesia and horrifying dreams in which he is tortured by the demonic Pinhead, Trevor soon realises that all is not as it seems, as he spirals into a personal hell of his own making…

The sixth instalment of the Hellraiser series, and the second to go straight to DVD, Hellseeker was apparently an attempt to emulate Barker’s original film. Director Bota, and writers Carl V. Dupré and Tim Day, had actually wanted to involve Clive Barker in the production, but were allegedly advised against this by Dimension, who wanted to continue moving the series in a new, Barker-free direction. Bota and co set about fashioning a film that would remain faithful to the tone of Barker’s original, and once completed, they sought out Barker’s approval by letting him watch an early cut. According to Day "Clive said that he thinks Hellseeker is the best one since Hellraiser II. I believe he said something like, 'Thank God, somebody finally got it.'" Hmmm.

Hellseeker starts off strong with the reintroduction of Kirsty Cotton (Ashley Laurence) and hits the ground running with a shocking car crash. It’s all down hill from here on in though, as the initial intrigue becomes lost in a tedious plot increasingly bogged down by endless scenes revealed to be nightmares, flashbacks, hallucinations, whatever. While Bota displays an aptitude for creating and sustaining a densely nightmarish atmosphere, the script just plods along aimlessly, and repetitively, and he fails to generate much suspense. He effectively blurs the line between reality and nightmare, ensuring the audience is as disorientated as Trevor, but it’s all at a crawling pace. Bota also suggestively introduces the notion that something isn’t quite right, and as the story unfolds, everything takes on a strangely threatening veneer. The washed out colour palette – all greys, blacks and sickly lighting – enhances the unyieldingly grim nature of proceedings. Scenes unfold in dingy, ill-lit apartments, dank warehouses, beneath flickering florescent lights, and drab offices peopled by unfriendly corporate types in dark suits. Hell has never looked so overcast. The presence of CCTV cameras and hushed conversations behind closed doors in many scenes help create a sense of isolating paranoia, but it suffers under the stifling monotony of Trevor (Dean Winters) staggering about as various women attempt to seduce him, only for them to wind up dead. Or for him to wake up, revealing what just happened to be a nightmare. Or something. We’re constantly reminded of the medication he’s on and prodded into suspecting it could all be in his mind. Is Trevor imagining all this? Do we care? And where the heck is Kirsty? 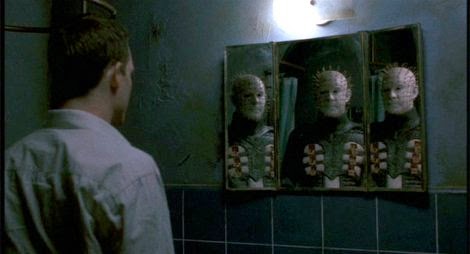 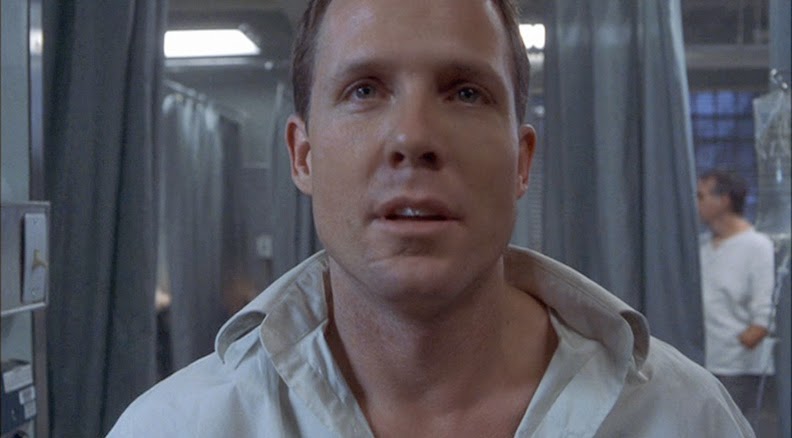 Hellseeker forms an interesting companion piece to Inferno, with its depiction of an unsympathetic protagonist/unreliable narrator condemned to his own private hell because of his wicked ways. As with Inferno, it’s all about comeuppance. Hellseeker is also more psychological than the prior films, though it still contains some fiendishly disturbing imagery, including a graphic depiction of brain surgery and the moment when Trevor starts coughing up water and a slithery eel. Eurgh! That certain aspects of the script resemble Jacob’s Ladder and Ambrose Bierce’s influential short story An Occurrence at Owl Creek Bridge, should suggest what you can expect from the 'twist' ending. One of the more promising aspects of the film is the reintroduction of the character of Kirsty Cotton from the first two films. Kirsty was the first person to defeat the Cenobites and emerge victorious, but not unscathed. Apparently Doug Bradley (Pinhead) called actress Ashley Laurence himself and asked her if she’d be interested in reprising her role, as her agent was none too keen on her getting involved. Alas, while Kirsty’s return could have been integral to the plot, the character only appears sporadically and, save for the pulse-racing opening and exposition-heavy denouement, isn’t given much to do. It doesn’t matter that it’s Kirsty – the character, and what she does, could have been anyone. Dean Winters does a decent job of conveying Trevor’s confusion and increasing horror, but he fails to generate any sympathy for the character. 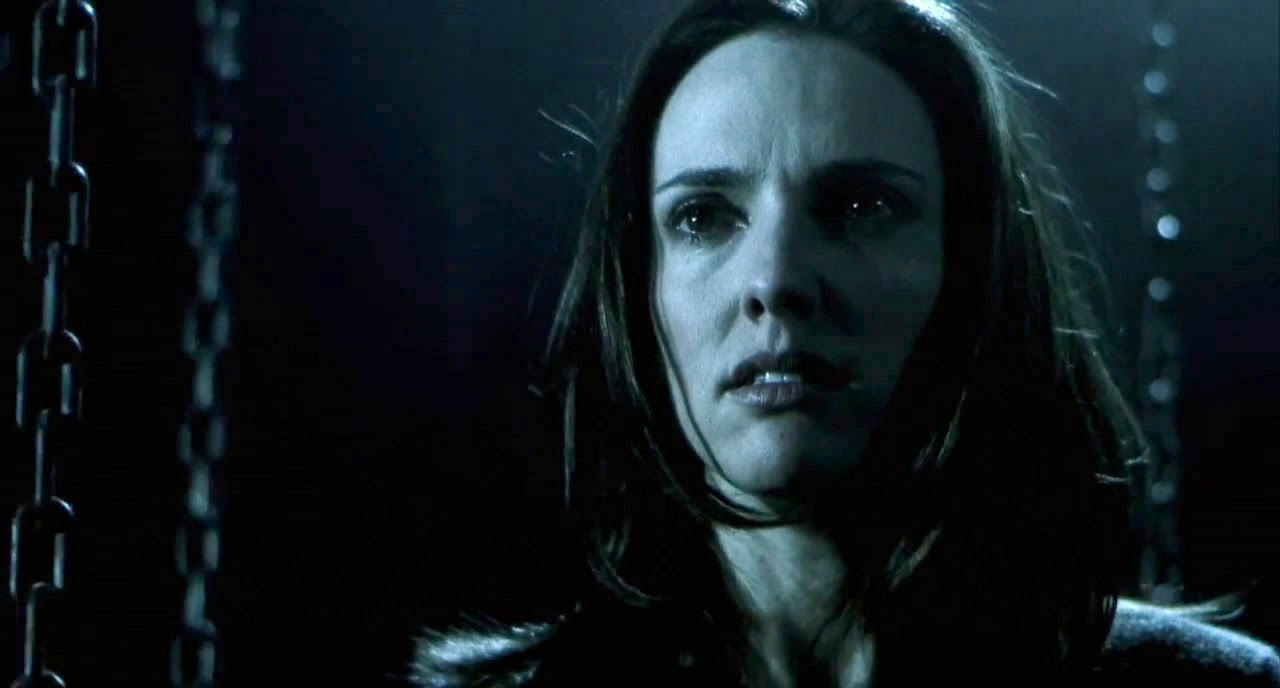 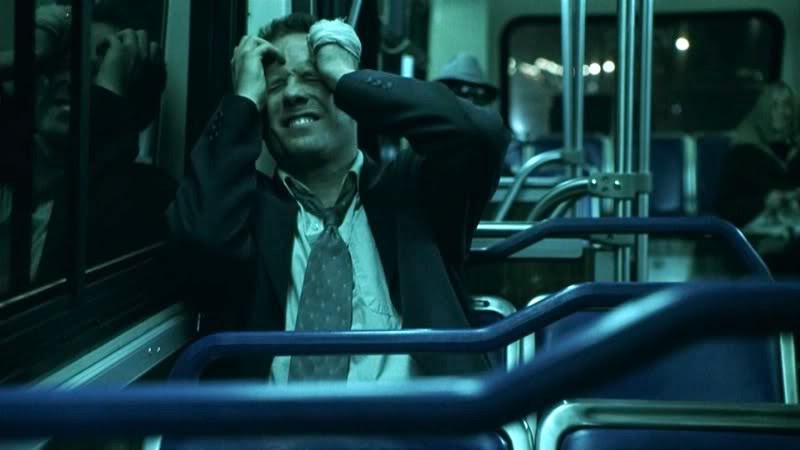 Hellseeker conjures an overwhelmingly oppressive atmosphere but it suffers because of the convoluted, muddled and tedious script. It could have been an interesting instalment - particularly as it reintroduces Kirsty – but it merely comes off as a wasted opportunity. As with Inferno, the 'Hellraiser' moments just seem like more of an afterthought than an integral part of proceedings.
Ashley Laurence Dean Winters Hellraiser Franchise Hellraiser Marathon Hellraiser: Hellseeker Psychological Horror Rick Bota

Wes said…
Straight-to-video Hell, still at least Doug Bradley figures in the story. And to think that once upon a time the eminent Barry Norman posed for a picture with Clive Barker and Pinhead no less, on the Hellbound set ! Watching a few clips on youtube, I see what you mean about the film’s visual sensibility – with all those metallic-grays, it looks like an emo-goth-rock video, which is rather depressing when one remembers how sensual and evocative the first two films look. The comparison you made to Jacob’s Ladder is intriguing but it sounds like the writers on the show were over relying on the get-out-of-jail card of the flashback/dream sequence when the narrative started drifting off course. James at this point you must be feeling a certain fatigue setting in !
18 March 2014 at 13:25

James Gracey said…
Fatigue??? Wes, you have no idea. That get-out-of-jail card is overplayed WAY too much in Bota’s sequels. Sometimes he demonstrates a great sense of style, but the piss-poor scripts he’s working from, coupled with the low budgets, just sinks everything. Usually I really like plundering through sequels in this way; as repetitive as the Friday the 13th/Halloween/Elm Street ones became, they were still fun on certain levels. However, the longer the Hellraiser films drag on, the more tedious and banal they become. I had hopes for this one – by reintroducing Kirsty it acknowledges the mythology of the series more than any other – but it’s such a muddled, unengaging mess. Sure, the central idea/twist is okay in theory, but watching this unfold is like watching blood coagulate. My least favourite.