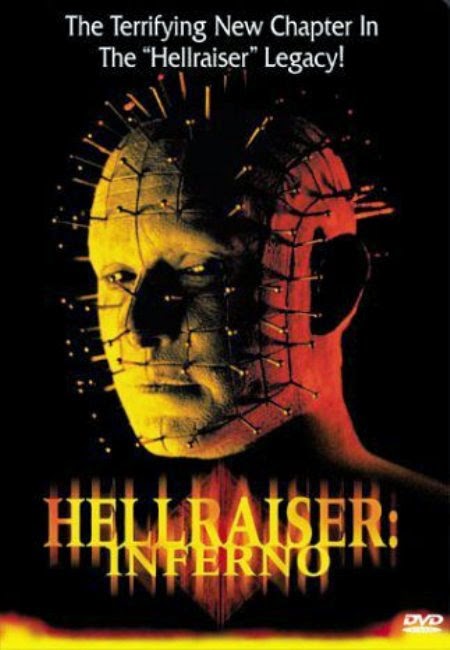 When he discovers and opens the Lament Configuration at the scene of a gruesome crime, shady LA detective Joseph Thorne finds himself embroiled in a series of sinister occurrences and hellish encounters with the demonic Cenobites. Presiding over events is a seemingly omniscient figure known only as The Engineer…

After Hellbound, the rights to Clive Barker’s burgeoning series were acquired by Dimension, then a sub-division of Miramax, specialising in genre films. They produced and distributed Hell on Earth and Bloodline, but after the troubled production of the latter, Dimension wanted to reinvigorate the franchise and take it in a new direction. Enter Scott Derrickson and Paul Harris Boardman, whose somewhat daring script essentially ignores the previous films and establishes a whole new set of rules for the series. Inferno acts as a stand-alone instalment; set after the events involving the descendent of John Merchant in Bloodline, but way before Pinhead's eventual destruction in 2127, it features the Lament Configuration and various Cenobites, including Pinhead, but is not connected to previous storylines.

Stylishly directed by Derrickson, who aims for an LA neo-noir feel, including snippets of a world-weary voice-over narration, Inferno is less concerned with gory violence and the murky realms of pain and pleasure dominated by the sadistic Cenobites, than it is with delving into one man's personal hell. Utilising a much more psychological approach than the prior films, it unravels as a dark and moody thriller with elements of Jacob’s Ladder, Se7en and 8MM. When Joseph (Craig Sheffer) inadvertently conjures the Cenobites by opening the puzzle box at the scene of a crime, torture naturally follows, but here it is psychological torture, and not the mutilation of the flesh the series usually revels in. Derrickson’s approach to violence is also much more psychological, with much of it occurring off screen, and the use of unsettling and downright gruesome sound effects allowing the audience to use its imagination. That said, Inferno is still peppered with macabre imagery, including the off-kilter dream sequences, the discovery of a bloody mattress in a hospital room and Joseph’s encounters with several Cenobites; one of which is a mutilated torso… 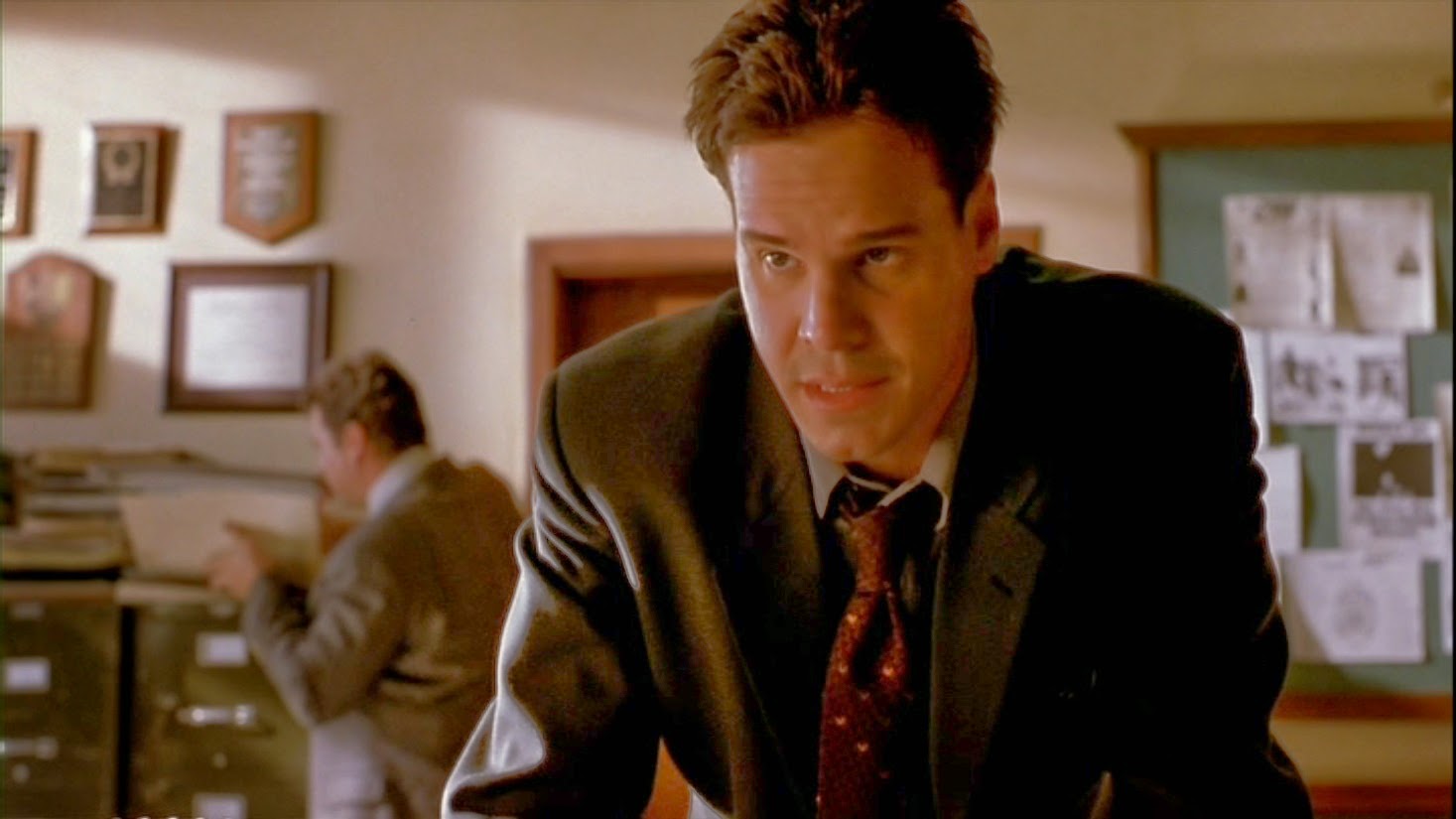 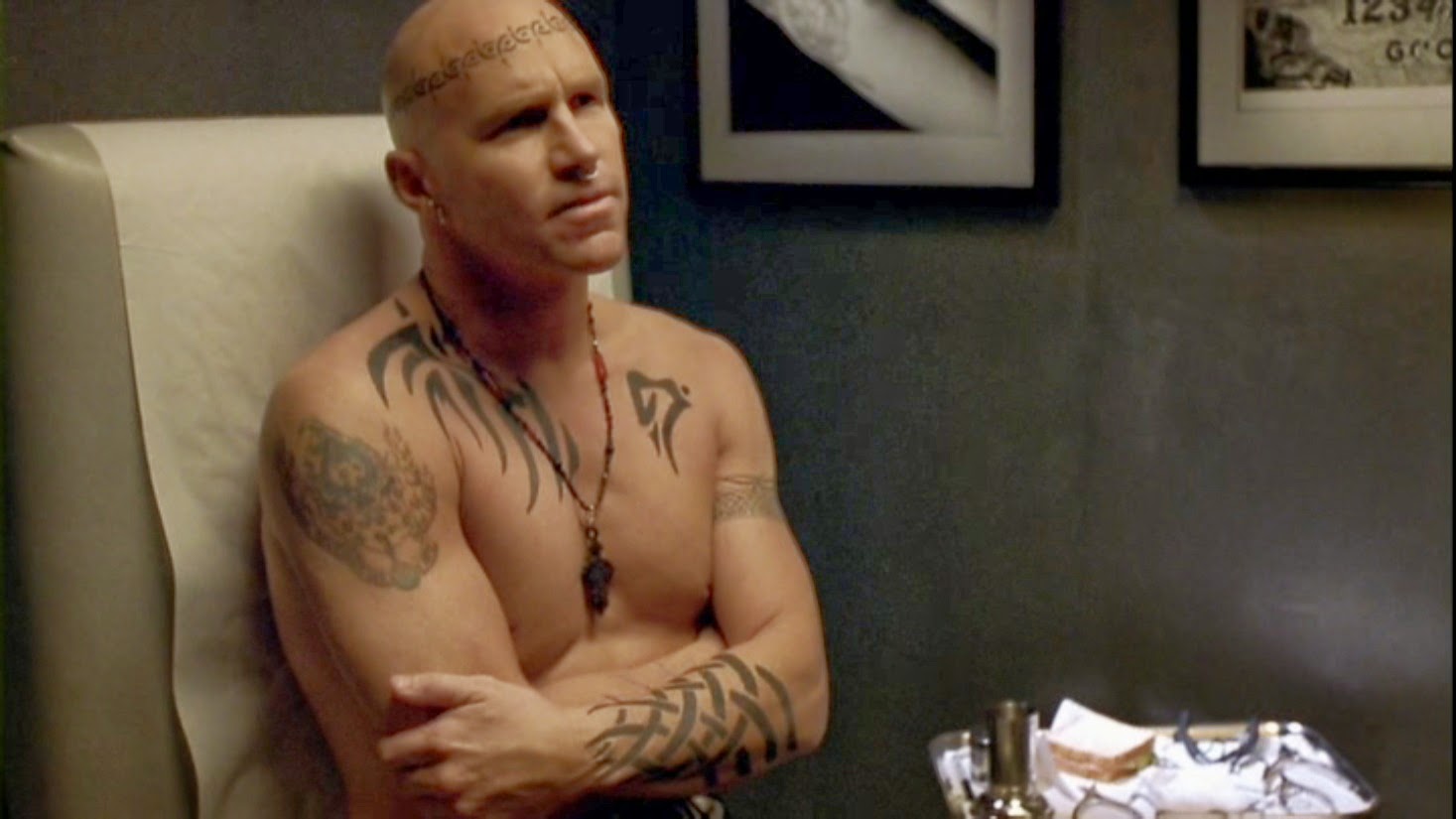 A practising Christian, Derrickson imbues Inferno with an arguably simplistic moralistic slant that isn’t as prominent in the prior films. In an interview with Christianity Today he stated “To me, the horror genre is the genre of non-denial. It's about admitting that there is evil in the world […] The genre is not about making you feel good, it is about making you face your fears. And in my experience, that's something that a lot of Christians don't want to do.” Inferno, perhaps more than any other Hellraiser film (save for Hellseeker) is about comeuppance. Sheffer’s character has corrupted his own innocence and realises that the time for redemption has long since past. He is a character torn between spirit and flesh, and by ultimately opting for the latter, condemns himself to a very personal hell in which he is forced to relive a grotesque nightmare of his own making over and over for all eternity. It’s an interesting, if rather black and white concept. 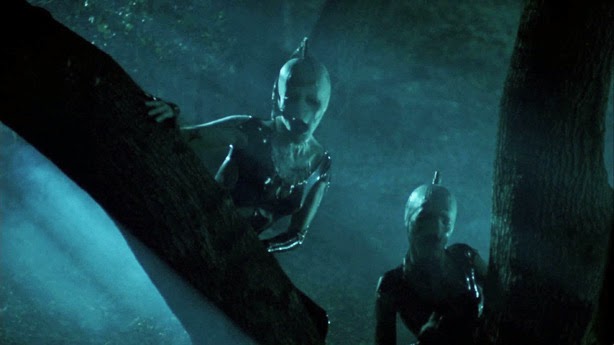 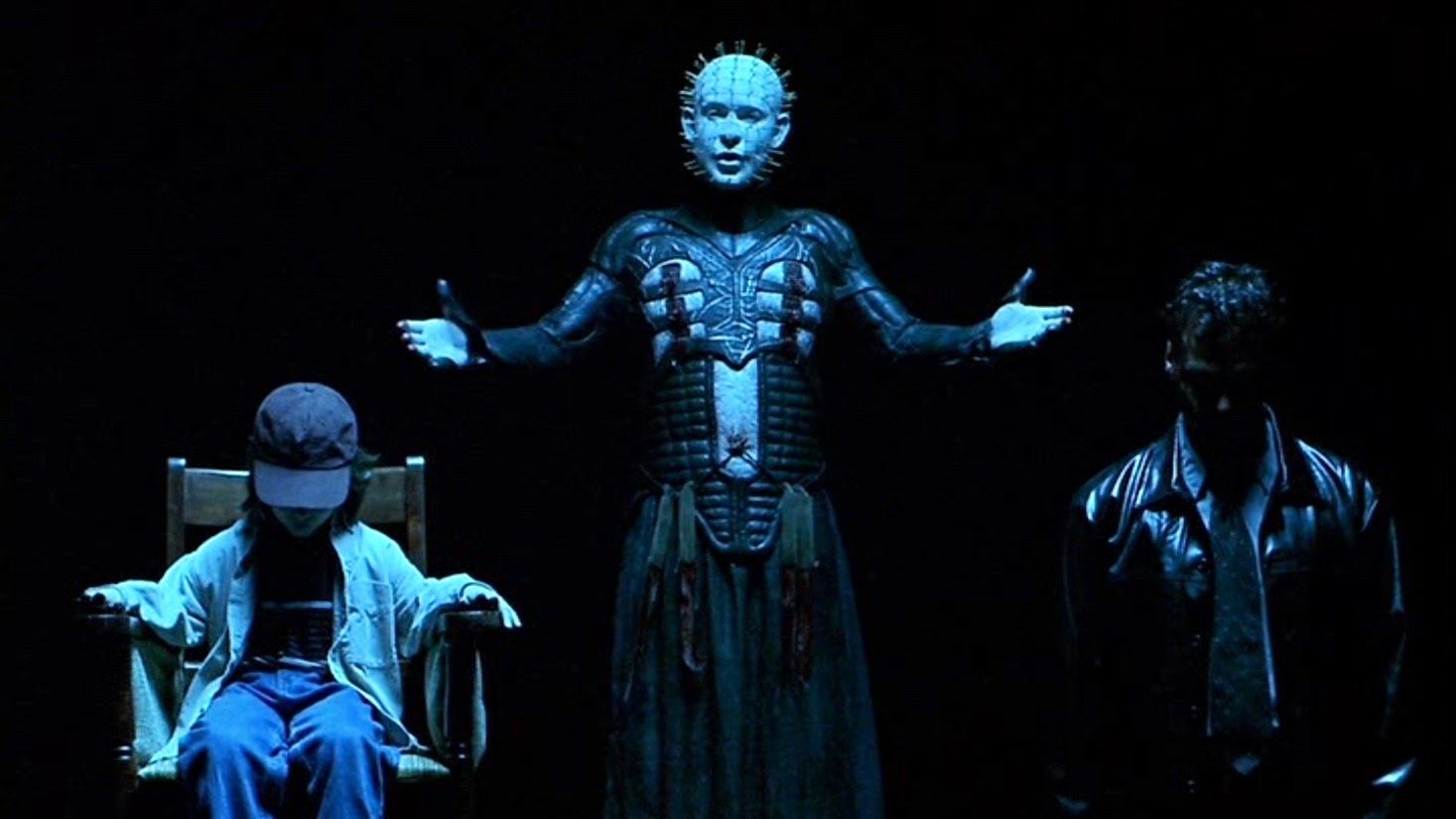 The narrative, which to begin with follows Joseph as he attempts to solve a string of murders, the victims of which are all connected to him somehow, becomes increasingly nightmarish. The discovery of severed fingers belonging to a child found at each of the crime scenes fuels the mystery. Joseph eventually begins to wander through unfamiliar spaces, and various moments are revealed to be dreams, or hallucinations, which underpin the psychological approach and render the audience as disorientated as the protagonist. The amalgamation of sex and horror that was a prominent feature of the first two films, and manifest in Bloodline in the guise of Angelique, here comes in the form of a disturbing scene featuring two female Cenobites who seduce Joseph. In one shocking moment, they begin fondling and caressing him by slipping their hands under the skin of his chest. Other than this instance, little of Barker’s sexual themes are present. 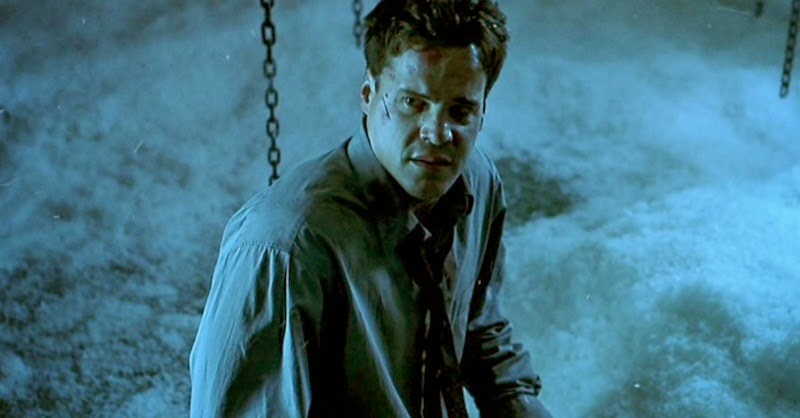 If Hell on Earth and Bloodline were the films in which Barker took a back seat, Inferno is the film that prompted him to back away entirely from the on-going series. At times the 'Hellraiser' moments seem like they’ve just been dropped in. While the unmistakable countenance of Pinhead (Doug Bradley) graces the DVD cover, he only appears on screen for a few moments, waxing lyrical about suffering and just-desserts. This also feeds into Inferno’s reputation as an untypical Hellraiser film. While it isn’t always successful, at least Derrickson and co attempted something different and tried to move the series in a new direction. If nothing else, it makes for an interesting footnote in the career of a director who has since gone on to make the likes of The Exorcism of Emily Rose and the critically lauded Sinister.
Hellraiser Franchise Hellraiser Marathon Hellraiser: Inferno Neo-Noir Psychological Horror Scott Derrickson

Wes said…
Fantastic stuff James. It certainly looks interesting from what I can glean from Dimension’s incoherent trailer. Picking up on your point about Pinhead having a minimal presence in the film, it’s interesting that two of the other major franchises, Halloween and Friday the 13th both have what I might call imposter films, namely Season of the Witch and Jason Goes to Hell – New Line obviously know which side their bread is buttered on in regard to the Elm Street series ! But I digress… I think the immediate problem I would have with Inferno would be the LA setting – I dunno how much of an influence this bears on the film, but for me, the contemporary urban setting of Hell On Earth was to the detriment of that film – after the hermetically sealed worlds of Hellraiser and Hellbound (the Cotton house, the Channard Institute), having the Cenobites stroll thru the streets of LA in Hell On Earth really struck a discordant note with me... Five films in, and we seem to have travelled an awful long way from The Hellbound Heart.
18 March 2014 at 12:35

Rg Lovecraft said…
Goodness gracious I hated this film. While I don't really like any of the Hellraiser films post Hellbound, this one just seemed to legitimately make me angry. I think it's due in large part to Craig Sheffer as Thorn. Couldn't stand the dude.

James Gracey said…
I know what you mean, Wes. There was something really effective about the limited settings of those earlier films – Part 1 is really quite theatrical in that regard, with the bulk of the story unfolding in a creepy attic, and in the only slightly less creepy house below. I have to admit, I enjoyed how Bloodline tried to open the story out and spread it across centuries and continents, but the series never again managed to muster the power wielded by those first two instalments. The setting of Inferno enhances the whole neo-noir vibe Derrickson and co are obviously going for, but as a Hellraiser film, I’m just not convinced it works.

Rg - Yeah, a few of the Hellraiser films really seem determined to out-do each other in terms of unsympathetic protagonists. I didn’t have any major issues with Sheffer, I thought he was okay as what was essentially quite a 2D character.

James Gracey said…
PS Wes, I like your point about imposter films. Not too sure if the Hellraiser series has one, but if it does, you could definitely argue the case for Inferno. Just for the record, I'm a big fan of Season of the Witch and Jason Goes to Hell. I like that something different was attempted, and I reckon it worked.
25 March 2014 at 13:14