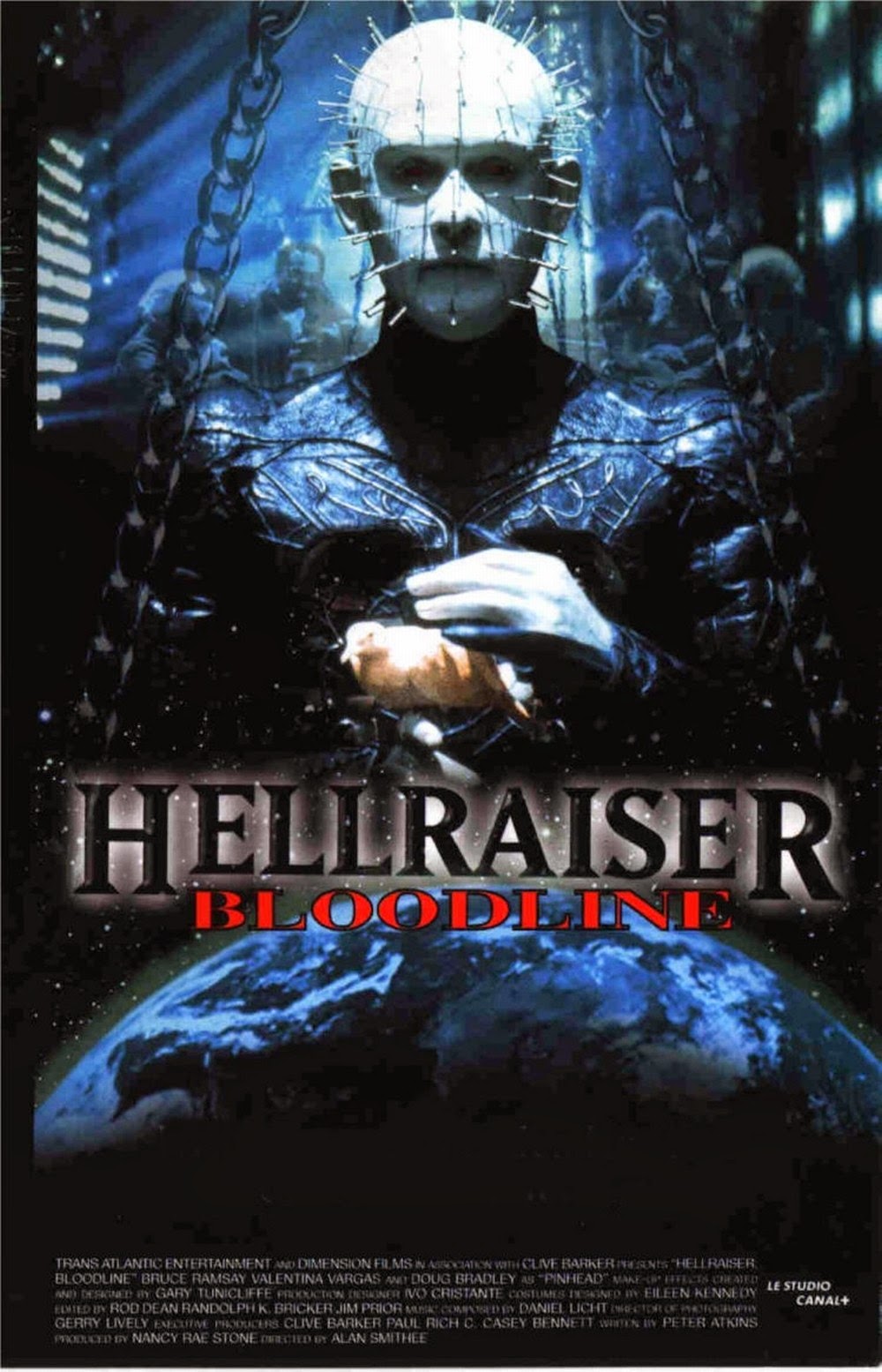 2127. A scientist onboard a space station attempts to complete the task began by his ancestor centuries ago; to destroy the puzzle box that, when solved and opened, allows the demonic entities known as Cenobites to enter our world and cause havoc and untold suffering in the name of pleasure.

Written by Peter Atkins, with Clive Barker serving as executive producer, Bloodline is the century-spanning origin story of the puzzle box that featured throughout all the Hellraiser films up until this point - and the sequels which followed. Acting as a doorway to hell itself, the box, an amalgamation of alchemy and science, grants demons access to our world. Director Kevin Yagher disowned the film when the studio began re-editing it, ordering re-writes and re-shoots, and generally preventing him from realising his grand vision. And what a vision this could have been. The tale of a family plagued for generations by demons who wish to create a permanent doorway into our world; beginning in 18th century Paris and culminating aboard a space station in 2127, via New York City in the 1990s, it’s an ambitious concept if nothing else. Sadly the budget, and aforementioned studio interference renders it a run of the mill, rather underwhelming slasher movie with but a few moments of surprising creativity.

Yagher had previously made a name for himself as a master of special effects, working on such titles as A Nightmare on Elm Street 2: Freddy’s Revenge, Child’s Play and The Hidden. He was so aghast at the changes imposed on Bloodline, he removed his name from it and replaced it with the Directors Guild of America approved pseudonym, Alan Smithee. Directors can do this when they feel that their artistic vision or creative control has been severely compromised by the interference of pesky studio executives more interested in money than creativity. Apparently many of Yagher’s more elaborate designs and ideas never even made it to the screen, including Cenobites decked out in French period garb. When Yagher walked away from the project, just before it wrapped, Joe Chappelle was hired to film the remaining scenes, reshoot some material - including the narrative framing device onboard the space station - and tie everything up. Chappelle had previously directed the equally misguided-but-strangely-fascinating Halloween: The Curse of Michael Myers (that’s Halloween 6, the one with the druids!). 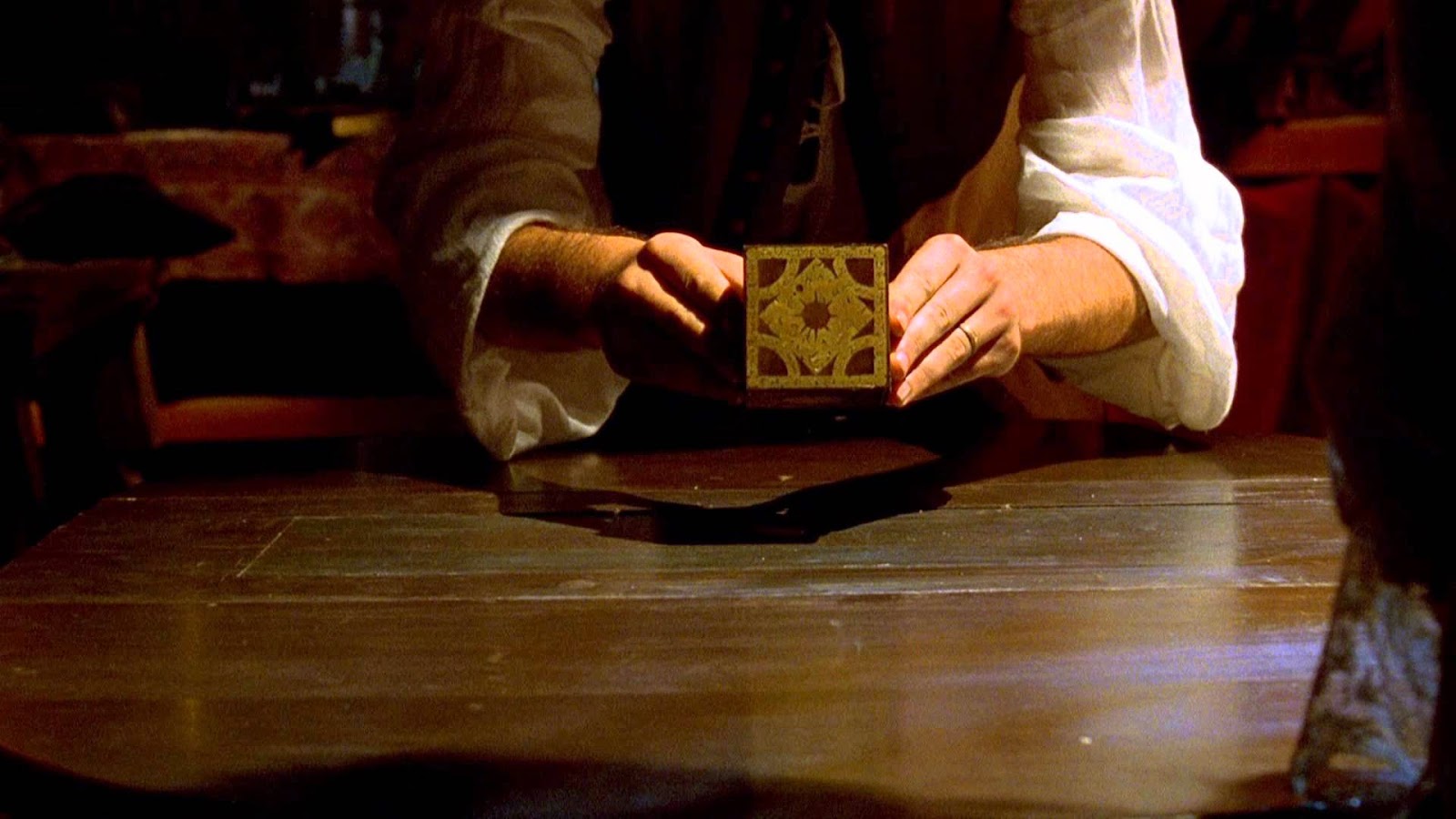 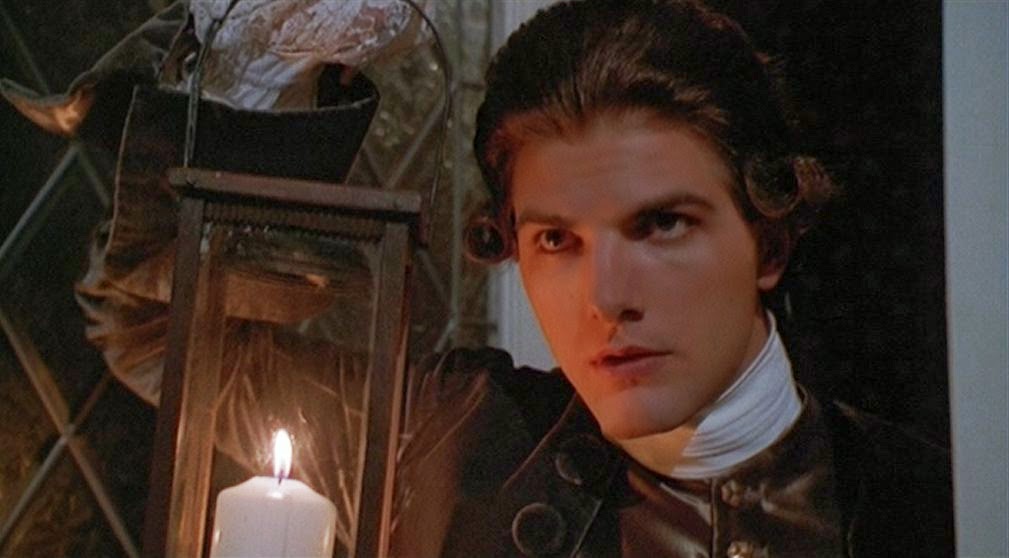 Lemarchand’s box, also called the Lament Configuration, was created in 1784 by renowned but financially destitute toymaker, Philip Lemarchand (Bruce Ramsay), mentioned in The Hellbound Heart as a maker of intricately designed mechanical singing birds, under the commission of the Duc de L'Isle, a debauched aristocrat with a penchant for dark magic. De L’Isle used the box to summon a demon, Angelique (Valentine Vargas), to carry out his every demand, and cater for his every twisted whim. Attempting to redeem himself by destroying the box, Lemarchand died realising he had cursed his entire bloodline. As the years passed, his future progeny forgot about the box, and the bloody history they share with it, but their ‘blood remembers’ and they see visions of the demon Angelique in their dreams. 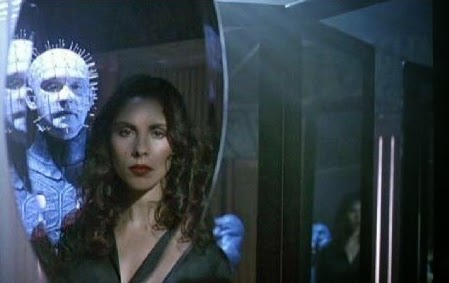 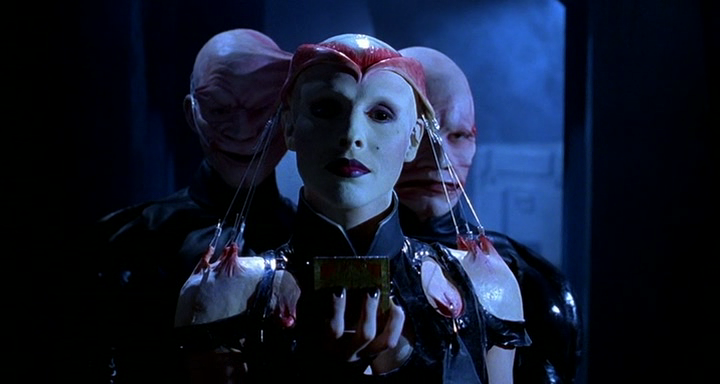 Again, as with the prior films, there is a strong sense of continuity present in Bloodline, and kudos must go to writer Peter Atkins, a veteran of the series at this stage, who, with the character of Angelique, creates what actually feels like a bona fide Clive Barker character. Alluring, seductive and deadly, she is a demon inhabiting the skin of a beautiful prostitute offered in sacrifice to her. When she emerges at the finale, complete with full-on Cenobite make-over, her appearance harks back to earlier female Cenobites, and reeks of the same morbid sensuality; a sensuality that was markedly absent from the prior instalment. Bloodline gets one thing right at least; it feels like a Clive Barker film. Albeit a rather flawed one. The most interesting moments come courtesy of the early 18th century period scenes, with their bloody invocations of demons by bewigged and decadent aristocrats, and the later scenes aboard the space craft. The promise of untrodden territory is strong in these moments, but sadly never delved into and explored as much as it could be. The final scenes aboard the space station feel very rushed, as the security guards are picked off one by one in a brisk, tensionless manner. Apparently Yagher wanted a more fragmented narrative, one which leapt back and forth between the various years in which the story unfolds, interweaving events and enriching the series’ mythology. There’s a dank beauty to the earlier scenes which depict the creation of the box, and a beautifully orchestrated score courtesy of Daniel Licht underpins the sweeping nature of the story; during its best parts, it hints at the epic scale of proceedings. 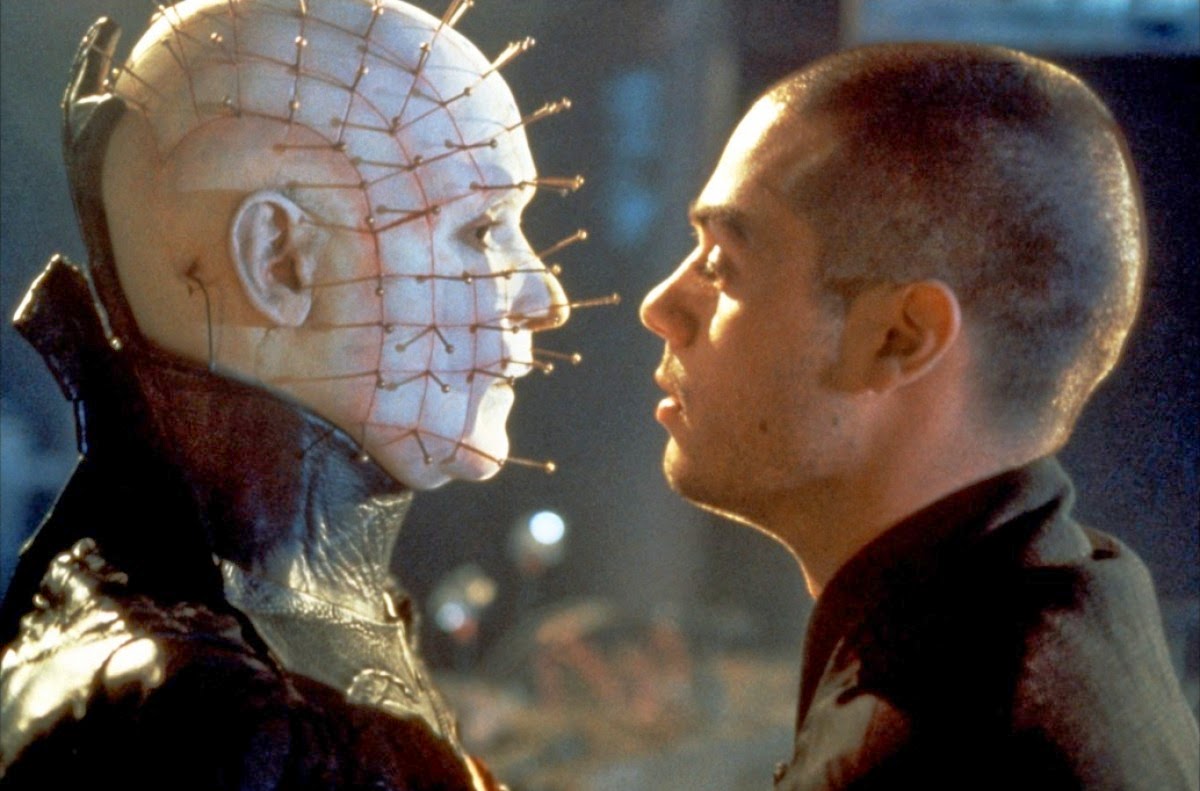 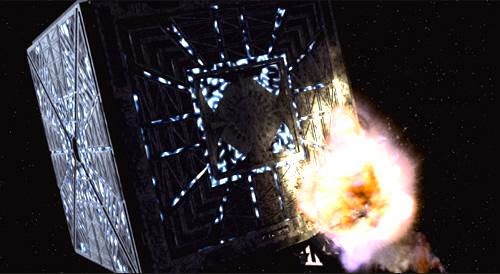 Weaker moments mainly occur in the second act with the introduction of one of Merchant's ancestors (again portrayed by Bruce Ramsay) - the architect who designed the puzzle box-inspired building glimpsed at the climax of Hell on Earth. Events are frequently quite clunky, particularly the scenes involving the hapless security guard twins, and the moment when 90’s Merchant’s young son is kidnapped by Pinhead (Doug Bradley). If you can get past the daft notion that part of the story is set in space (!) and try to get on board with what Yagher and co were attempting to do, the current cut of Bloodline is an interesting but flawed film; and a highly lamentable one because of its wasted potential. That said, it is rarely dull, and there are enough ideas and revelations to satisfy admirers of the series. Unfortunately it isn’t quite the grand denouement the Hellraiser films to this point arguably deserved. Amongst the grandiose scope is a plethora of cheap horror troupes which render Bloodline a strangely perfunctory, rather mundane title. Shame, really. Still though, SPACE.

Wes said…
James, we’re into uncharted waters now , at least for me, the 3rd film was my last outpost and I never ventured any further… Bloodline certainly sounds like an ambitious film, and the question is would Kevin Yagher have brought it off if he was given his director’s cut ? Has a work print ever leaked out ? I wonder were the Clive Barker’s Hellraiser comics feeding into the film – Epic’s original series ran from 1989-1992 and the writers were given a broad canvas to work with, with stories set at various epochs – although I cannot quite recall if any of the stories were set in space – just looking at the screenshot of the Lemarchand’s box, it strongly recalls the image of the Borg cube spaceship in Star Trek The Next Generation… I’ve just checked out the (lo-fi) trailer on youtube, and it looks a little uninspiring, still if the film came my way, I’d see it…
18 March 2014 at 11:38

James Gracey said…
As far as I know, a work print has never emerged, but having a look about online uncovers some clues as to what he would have done had he been allowed. As I mentioned, there were to be moments featuring Cenobites in French period dress… The comics are uncharted territory for me, but I wouldn’t be surprised if they’d started influencing the films. There’s an abundance of rich mythology coursing through the first few titles, but it’s never exploited enough as the series trudges on. Bloodline attempts that but just comes off as underwhelming. The later films only make vague references to Cenobites, the Lament Configuration and Lemarchand, and as far as I recall they certainly don’t reference events from earlier films. There is no sense of continuity. They act as murky standalones.
25 March 2014 at 13:34