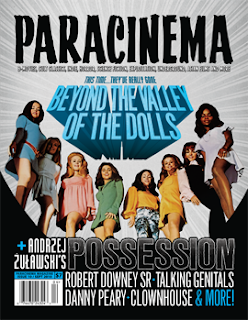 As Matt over at Chuck Norris Ate My Baby so rightly pointed out, the latest issue of Paracinema magazine is now available to order! This is no ordinary issue (not that any of them could be described as ‘ordinary’ anyway), this is a big one: the tenth issue!

Independently produced to the highest standard, each issue thus far has been smartly crafted to cater to the more thoughtful genre fan – intelligent, left of centre articles on all manner of cult, exploitation and obscure cinema are the order of the day; and issue 10 is no exception. Amongst the positively tantalising array of articles included in this issue are the likes of Melodrama in Fast Motion: Beyond the Valley of the Dolls As Not Just Strange but Scathing by Adam Blomquist; Pink Socks and Monsters: Excess in Andrzej Żuławski’s Possession by Todd Garbarini and Send In the Clowns, If Your Conscience Can Handle It: The Complications of Watching Clownhouse by Emily Intravia of The Deadly Doll’s House of Horror Nonsense infamy.

Some back issues are also still available to order…

If you’re at all curious about Team Paracinema, head here to read an interview with the magazine’s editor and co-founder, Christine Makepeace, in which she discusses the genesis of the magazine, the seemingly everlasting appeal of cult movies and the challenges of producing an independent magazine.