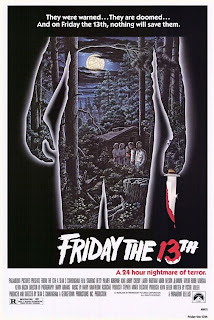 A group of eager young camp counsellors’ are stalked and brutally murdered by an unknown assailant while trying to re-open a summer camp that was previously the site of a child's drowning and a number of mysterious deaths.

The original, and very openly cynical, copy-cat slasher, Friday the 13th is way better than it has any right to be, and despite it being the instigator of most of the clichés we now know (and love) of the slasher genre, it’s a film that still stands as an effectively executed and frequently suspenseful horror flick. Modelled on Mario Bava’s body-count classic Bay of Blood, Cunningham and writer Victor Miller also took the basic premise of John Carpenter’s Halloween – teens imperilled by a psychotic killer - and simply added more violence, blood and carnage.

In its wake, Friday the 13th left us with all the standard rules and conventions of the slasher movie. Sure, Halloween exhibited them first, and Black Christmas before that, but it was really Friday the 13th that cemented them. And then recycled them, over and over, as if hammering home the point. You can usually spot a slasher by its familiar structure and the following clichés usually feature somewhere:
• A masked/unidentified killer who is usually avenging a past ‘misdeed’
• A group of teens in an isolated location
• Phones/cars that have a nasty habit of not working when they’re needed most
• Ineffective police/authority/adult figures
• Drug/alcohol use
• Characters having premarital sex
• Characters’ splitting up to look for other characters/investigate strange noises, usually in creepy woods or in dark basements.
• The use of knives or other sharp implements as murder weapons – killers in slashers prefer the thrill of the chase and the intimacy afforded by killing victims up close and personal with a knife.
• There is always one character (often a young woman, the ‘final girl’), usually the one who doesn't have sex or indulge in drugs/alcohol, who is left standing after her friends have been bumped-off by the killer. She must use her resourcefulness to escape and stop the killer.
• The way is always left open for a sequel, should your slasher movie be successful. 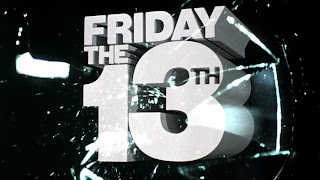 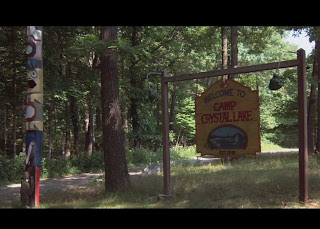 Right from the creepy opening, Cunningham attempts to put the audience on edge. Boasting uneasy Point Of View shots of someone skulking around a summer camp at night, watching sleeping children and spying on randy counsellors, he starts as he means to go on. The film is loaded with sinister POV shots, as characters are spied on from around corners, through branches and between curtains. We immediately get the sense that a threatening presence is lurking just off-screen the entire time, waiting to pounce. It’s obvious this is a low budget, somewhat gritty affair – and as such, it feels more believable; the cheapness has a touch of Cinéma vérité about it. Adding to this is the effectively realised sense of isolation that permeates proceedings. The quiet lakeside and sun-dappled forests are fine during daylight hours, but when night falls – the sense of unseen menace becomes unavoidably conspicuous. Cunningham heaps on the atmosphere and sense of dread - the sounds of the night – owls, insects – the storm, the dark forest engulfing the fragile light from the little cabins, which seem so unsecure. All this, combined with an unshakable sense of isolation, a frenzied soundtrack and THAT whispering, ensure things remain very spooky indeed. 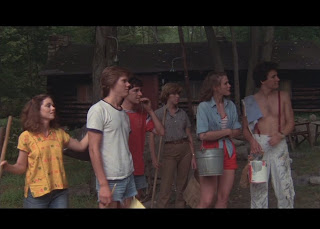 While the characters are mainly drawn with the broadest of strokes, the young cast (including a then unknown Kevin Bacon) are all enthusiastic and likable and their performances are naturalistic and restrained enough to help flesh out their paper thin characters. Much of the second act depicts them carrying out various domestic duties, blissfully unaware of the danger they’re in. The mundanity of their day-to-day tasks and routines heighten the ‘believability’ of their situation as well as adding a sense of voyeurism and mounting suspense. Only Alice (Adrienne King) – who reveals early on she has some issues back home she ‘needs to straighten out’ - emerges as the most rounded character. And that’s not really saying much. Still, some pretty intellectual conversations abound, adding a rich sense of depth to the characters; for example the scene in which they hypothesise about which flavour of ice-cream they’d each be if they could be. But hey, we’re not here for intricate character studies and careful nuance – we wanna be terrified! A couple of kills are left off screen, though the one’s we do see are crowd-pleasingly gruesome – an axe to the face, a spear through the throat.

*Spoiler Alert* Cunningham also successfully relies on the art of misdirection and clever editing in a couple of scenes to defy our expectations – like when we assume Annie is the main character, only for her to get bumped off shortly after we meet her. Much of the make-up effects remain startling and effective today – there’s no CGI here, all this stuff was done with prosthetics. Most shocking is still Annie’s demise where she’s pinned up against a tree and has her throat slashed. That it happens in broad daylight in an otherwise pleasant looking wood, adds to the impact. 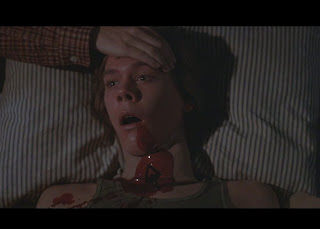 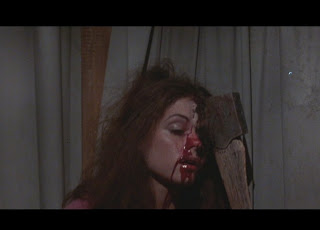 Various memorable moments (mainly the death scenes) pepper the narrative and all are carried off with aplomb. At its heart, Friday the 13th is arguable a gory, red-herring leaden murder mystery - with the emphasis on the murders, not the mystery. As the utterly deranged Mrs Voorhees, Betsy Palmer provides a performance that hinges on camp exuberance and strange pathos – here is a woman driven mad from grief over the death of her son. She is to be pitied as well as feared and loathed; her motivation - like so many classic slasher movie maniacs - is revenge; in this case, for the death of a loved one. Her introduction at the end, as an old friend of the camp owners, seems to come out of nowhere, but a taut chase scene ensues, so all is forgiven. 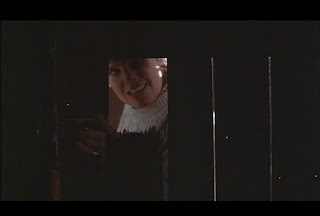 The tranquillity of the closing scene, with Alice drifting in the boat, surrounded by the ethereal beauty of the forest and rippling lake – the police arriving on the shore and calling out to her - is disrupted by one of the best well-timed shock-jump moments in cinema history. Sure, Cunningham ripped off Carrie, but he did it with such gusto that he ensured many a pair of pants were well and truly shitten!

A spit and sawdust classic of its kind; Friday the 13th is a quintessential slasher which still exhibits a back to basics primal fear and serves as a bluntly violent take on the classic 'Babes in the Woods' formula. 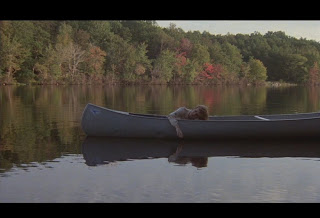 Aaron said…
Nice to see you covering the Friday the 13th movies, James. I've grown to love the ANOES franchise more over the last year or so, but the few FRIDAY movies I like (mainly 2-4) hold a special place in my heart. What I love most about the FRIDAY movies are that they discourage people from smoking dope and having sex in the woods (drugs and sex are EVIL). Well, except for the "re-boot" because Jason was obviously a harvester of ganja in that one.
4 December 2010 at 04:05