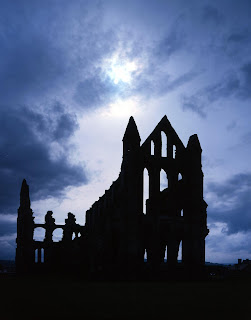 Perched upon the north-east coast of England, the ancient seaside town of Whitby is nowadays synonymous with macabre tales of the undead thanks to its role in Bram Stoker’s feverish, blood-fuelled novel, Dracula. The town had an immense influence on Stoker when he came to pen his classic vampire novel, and it has recently made the headlines with morbid events that could have been lifted directly from the pages of Stoker’s creepy classic. Human bones have been exposed in St Mary’s church graveyard after a landslide took away part of the cliff upon which it rests. The landslip, caused by a broken drainage pipe and excessive rainfall, has exposed ancient graves, and a stream of water can now be seen flowing out of the rock face where the bones were recovered. According to officials, the bones have been collected and will be reinterred.

The church, founded around AD1110, was built more than 900 years ago, with the cemetery closing in 1865. Several passages of Dracula take place in, or were inspired by this location. A Grade I listed building, St Mary’s is the oldest building left in Whitby. The land, including the cliff itself, is the property of the church, and it is their responsibility to carry out repairs. St Mary's rector, Canon David Smith said: "The cemetery has been closed for over a century, so if any graves are exposed it's only bones. If anything is exposed we collect and reinter them in the same churchyard away from the edge." He also explained that the church has been trying to rectify such matters and amongst other things has been liaising with civil engineers to make the cliff more secure. Whitby town councillor, Steve Smith, said the church building was not under threat. "The church is close to the edge of the landslip, some work has been done where the slippage is. I'm assured by the rector that the church itself is built on a solid rock foundation."

Residents are concerned further landslides may occur should the cliff be subjected to more heavy rainfall. This is the latest disaster to effect the town; five houses in Aelfleda Terrace were demolished in December after heavy rain and flooding washed the steep bank beneath them away.

This news follows on from the announcement that Paragon Entertainment - the company that designed the Titanic Belfast experience in Northern Ireland - has revealed plans for a new million-pound visitor attraction based upon the work of Hammer; with Whitby touted as the prime location. Head of Paragon, and Whitby resident Mark Pyrah, told the Whitby Gazette that the town was number one on his list of preferred locations, stating: “I strongly believe Whitby is a fantastic site for one of these attractions. We’re hoping Hammer is going to be a groundbreaking attraction and we won’t look at another site, other than Whitby, in the north east. We want to create a series of horror visitor attractions. They could be museum-based or attraction-based – by picking things from the films – or it could be a scare attraction, it depends on the local audience.”

The Whitby attraction could really enrich the town’s connection with the macabre and otherworldly; there are already myriad Bram Stoker and Dracula related tours visitors can enjoy, and the town is also home to the annual Bram Stoker International Film Festival. Head of Hammer Films Simon Oakes commented: “We are excited to be working with Paragon. They are one of the leading companies in the UK who have a deep understanding of what UK customers want in terms of exciting visitor attractions. This deal with Paragon gives Hammer another exciting way to give our audiences and fans a chance to get involved with the characters and worlds created in our films and take fans to the next level in terms of visitor attraction and experience.”

The recent worldwide success of The Woman in Black has truly heralded Hammer’s comeback, and it appears to be making the most of its success by branching out into other spooky avenues such as publishing, horror theatre production and now a visitor attraction in Whitby.

It is said that had Stoker not stayed in the quaint town, it is unlikely that Dracula would ever have been written. Aside from using it as a central location in the story, Stoker also based many of the events in the novel on real life events from the Whitby area. The utterly haunting passage in which the ghostly schooner, the Demeter, is dashed into the harbour with the captain’s corpse lashed to the helm, and a huge wolf-like creature bounding overboard and disappearing into the dark of the stormy night, is the stuff of nightmares. However these moments were apparently inspired by actual events Stoker became aware of while staying in Whitby. 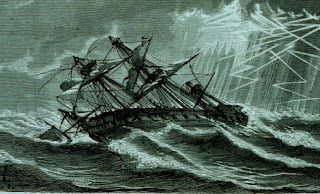 The locals regaled the writer with tales of the Russian ship, the Dmitri, which, much like events later echoed in Dracula, was beached in the town’s port after a huge storm. The monstrous wolf-like creature is reminiscent of the Barghest, a huge phantom hound which, according to local legend, stalks the Yorkshire Moors and the areas surrounding Whitby. It was also in the town library where Stoker allegedly encountered the name Dracula for the first time. Borrowing An Account of the Principalities of Wallachia and Moldavia (1820) By William Wilkinson, Stoker made notes from the book (now part of his papers housed at the Rosenbach Museum in Philadelphia), including a short section on a "Voivode Dracula", who fought against the Turks in ancient times, which he copied verbatim into his notes: ‘footnote, Dracula in Wallachian language means Devil.’

My good friend, the esteemed Jon (Shocks to the System) Towlson visited Whitby last year and took some photos. You can view them here, and as I’m sure you’ll agree, they perfectly capture the haunting beauty of this place. It’s easy to see why it had such an influence over Bram Stoker, and continues to bewitch the plethora of adoring horror fans who pilgrimage here year after year. Hopefully the church and local officials can repair the damage done to the graveyard and preserve this important piece of British horror heritage.
Bram Stoker Dracula Hammer Horror Human Bones News Story St Mary's Church Whitby Whitby Abbey

systemshocks said…
Thanks for the mention, James! I hadn't heard about the graves being exposed but it does seem very apt. It will be interesting to if Paragon/Hammer get something off the ground. I shall certainly visit again if they do.
17 January 2013 at 12:49

James Gracey said…
Pleasure, Jon! Pondering all things Whitby I remembered your trip there and the beautiful photos you took. I really need to visit the place myself one day. I hope all is well with you, and that the book is coming along nicely. :)
17 January 2013 at 20:53