It should be said that I'm not an expert on H.P. Lovecraft by any means, but, like every horror buff, I know of, enjoy, and appreciate his work for being so far ahead of its time, and essentially paving the way for many horror authors whose works have affected pop culture, literature, and cinema. I went into this film, and I'm approaching this review, mainly as a fan of director Albert Pyun, who recently retired due to health problems. He's a filmmaker who's primarily worked in the straight-to-video market. Some of his more notable films include Cyborg (a favorite of mine), The Sword and the Sorcerer, and Vicious Lips. So when I found out that Pyun directed a Lovecraft adaptation, to say that I was curious would be an understatement.

Cool Air, which was apparently produced back in 2006 but sat on the shelf for seven years before being released in 2013, is based on Lovecraft's short story of the same name. There have been other adaptations of this particular story in cinema and television, but this one is Albert Pyun's. Which isn't really saying much. Pyun isn't someone I (or anyone else for that matter) would call an auteur, so, unless you already go into a movie knowing he directed it, there's really no way to tell you're watching a Pyun joint. That said, I wasn't quite sure what to expect. The fact that it's been shelved for so long isn't exactly indicative of a good movie (unless that movie is All The Boys Love Mandy Lane), so I approached this one with caution and low expectations. Turns out Cool Air is pretty faithful to the source material, but with a few tweaks. A nameless, jaded writer in New York encounters an eccentric doctor. The doctor lives in isolation and needs his surroundings to be at an extremely low temperature in order to survive. The writer suffers a sudden heart attack and is forced to seek out the help of the doctor, who saves his life. They form an unexpected friendship, but it isn't long before the writer makes a shocking discovery regarding the doctor's identity and whatnot. 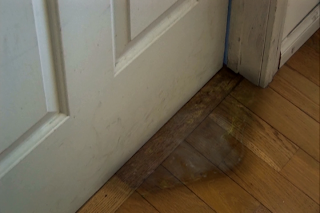 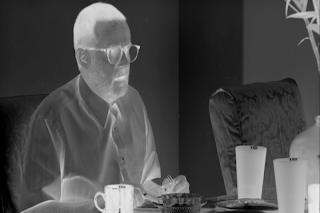 The above is a brief synopsis of Lovecraft's original story, but you could also apply it to the film. The only thing you'd change is the location. Instead of being set in New York, Cool Air takes place in Malibu and revolves around a writer named Charlie Baxter (Morgan Weisser), who rents out a room in an old, palatial home. Baxter is a screenwriter suffering from writer's block. As he settles into the home and is shown around by the landlady, he meets the other residents and what follows is a story that's pretty much directly based on the source material. Like the narrator in Lovecraft's short story, the lead character in this is also repulsed by cool air for reasons that are later explained. It should be said that the film makes a drastic change to the character of the doctor, but only on a surface level, and not enough to significantly affect the context of the story - aside from some undertones in the relationship between the two central characters. Oh, and there's also a supernatural element established at the beginning that tries to add some depth to the doctor, which is one of the film's awful bookends.

In the spirit of the source material, there's a lot of narration in the film. More narration than actual dialogue as a matter of fact. Some of the narration is quoted verbatim from the source, but it's safe to assume that lines like "Autistic hottie" were written for the movie. That much narration works as long as the visuals are interesting enough to keep your attention and guide you along, but unfortunately it's not the case here. Cool Air looks and feels incredibly low-budget, with very few cinematic flourishes aside from a heavy use of Dutch angles. In its defence, I assume Pyun and his crew were trying to be as economical as possible, and if there's one thing Pyun knows how to do, it's stretch a dollar. In that respect (and keeping in mind the year it was produced), it's a serviceable indie movie, but there's always room for improvement. And there's no excuse for the visible microphone that was right up to the lead actor's face in a shot where he had NO DIALOGUE. 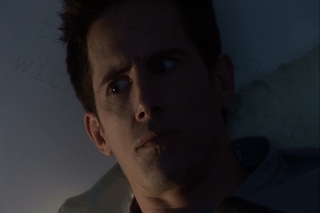 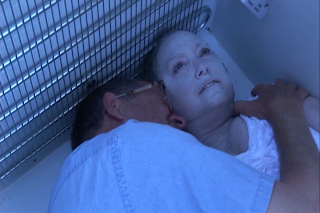 Aside from an embarrassing and borderline offensive portrayal of an Autistic character, the acting is pretty solid, which is surprising considering how low-quality everything else is. You'd typically associate terrible acting with a seemingly no-budget movie of this type, but at the very least we get some decent performances here. Also noteworthy is the use of CGI. Again, Pyun wasn't exactly working with a James Cameron budget, and the special effects are certainly reflective of that. However, despite being very noticeable, the use of CGI made for some interesting visuals. Interesting for the wrong reasons? Perhaps, but I think it worked within the context of the film, essentially shown through the eyes of the lead character. With Cool Air there are enough changes and tweaks to make it unique, but it relies too much on the source material to stand on its own, if that makes any sense. And the timing for its release is interesting when you keep Albert Pyun's health issues in mind. There's a great deal of focus on mortality in Cool Air, and I'm sure this is something that's unfortunately became more relevant in Pyun's life than it's ever been. As flawed as this film is, its loyalty (for the most part) to H.P. Lovecraft's short story made it inherently tolerable, and I'd be curious to know what Lovecraft enthusiasts think of it.


Aaron blogs over at The Death Rattle and contributes to The Gentlemen’s Guide to Midnite Cinema. Check out his podcast, The Mill Creeps, for reviews and appreciations of all things Cult Cinema.
Adaptation Albert Pyun Cool Air Guest Post HP Lovecraft Indie Film Low Budget