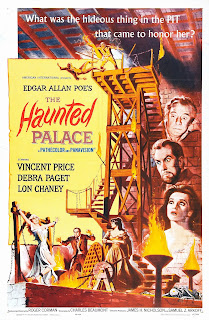 While it takes its name from a poem by Edgar Allan Poe, The Haunted Palace is actually an adaptation of HP Lovecraft’s The Case of Charles Dexter Ward. It’s still regarded as one of the titles in Corman’s Poe cycle, not only because of its title, but because of its shared aesthetic, a gloomily literate script, unyieldingly grim atmosphere, preoccupation with death and mourning, and a household plagued by its dark secrets. There is also the presence of one Vincent Price, a stalwart of Corman’s Poe adaptations. While the director had actually been keen to move away from Poe adaptations, he was persuaded not to buck the trend by producers, as their Poe films had been immensely successful. A compromise was reached - the film would be an adaptation of Lovecraft, but would take its title from a poem by Poe. It successfully entwines the themes and sensibilities of both writers and emerges as one of the best horror films made by Corman at this time.

Lovecraft’s story concerns the titular character’s growing obsession with his wizard ancestor Joseph Curwan, who he not only physically resembles, but after a while, begins to act like, too. Finally locating his ancestor’s remains, Ward resurrects Curwan through the use of weird alchemical practices. Turns out Curwan is a necromancy practising serial killer with vampiric tendencies who resumes his rein of evil and eventually murders Ward and assumes his identity in order to continue his ghastly research…

The script by Charles Beaumont (The Masque of the Red Death, The Premature Burial) retains the essence of Lovecraft’s novella and incorporates certain elements of The Shadow Over Innsmouth and The Thing on the Doorstep. It features Mr Price as Charles Dexter Ward who, upon returning to his ancestral castle home in order to sell it, becomes possessed by the wicked spirit of his great great grandfather, Joseph Curwan, who was burned as a warlock by the townsfolk of Arkham for his dalliances in the dark arts. But not before he placed a curse on them, dooming their ancestors to all manner of grisly fates… His oppressive will and influence enables him to inhabit Ward’s body (also reminiscent of events in Lovecraft’s The Thing on the Doorstep) and continue his macabre intentions to connect with the Old Ones - a frenzied pantheon of sinister, life-extinguishing entities from the outer reaches of space. They once ruled the earth, but now lay dormant – ‘dead but dreaming’ – waiting for a time when ‘the stars are right’ to return and eradicate human existence.

Typical of Corman’s Poe Cycle, The Haunted Palace was shot on a fairly restrictive budget using sets from other productions. Corman’s direction is stately and sombre and his camera sweeps gracefully through dark, cobweb adorned hallways, misty village streets and dank, shadowy dungeons. The production design courtesy of Daniel Haller (who would go on to direct adaptations of The Colour Out of Space and The Dunwich Horror) is typically elegant and helps to elevate the film to a much grander, opulent scale. The studio bound sets lend proceedings an almost otherworldly atmosphere as Corman ups the Gothicism, with blue-lit fog swirling around ancient gravestones, crashing thunderstorms in the night, and terrified characters tip-toeing wide-eyed through darkened rooms. A gloomy atmosphere presides over everything and memorably macabre moments are laced throughout, such as the scene where Ward and his wife are slowly surrounded by the deformed townsfolk - revealing the terrible fate that Ward’s ancestor condemned them to. This moment seems to be inspired more by The Shadow Over Innsmouth than anything in The Case of Charles Dexter Ward, as the former featured a town peopled by monstrous hybrids, the result of mating between humans and creepy sea deities.

The cast includes a few recognisable faces from the genre, such as Lon Chaney Junior, who has a small but memorable role as one of Curwan’s necromantic accomplices and whose introduction serves as a particularly effective jump scare, Debra Paget (Tales of Terror) and Elisha Cook (Rosemary’s Baby, House on Haunted Hill). Vincent Price carries the film in the duel role of Ward/Curwan, delivering distinct performances for both. He deftly conveys the psychological battle which rages full force behind his eyes as Curwan seeks to usurp Ward and use his body to continue his evil practices. As Ward he is gentle and mild mannered, but when he flashes a sly, side-long glance full of malice and spite, we know that Curwan is on the prowl.

The Haunted Palace retains much of Lovecraft’s characteristic pessimism and bleak outlook, with poor Ward eventually loosing his internal battle with Curwan and disappearing forever. Elsewhere, Lovecraftian themes of tainted ancestry and the sins of the fathers take centre stage, and things culminate in an attempted ritualistic sacrifice in the dungeon of the castle, which affords us a glimpse of a tentacled monster emerging from a well...
Adaptation Edgar Allan Poe Gothic Horror HP Lovecraft Roger Corman Sixties Horror The Case of Charles Dexter Ward The Haunted Palace Vincent Price