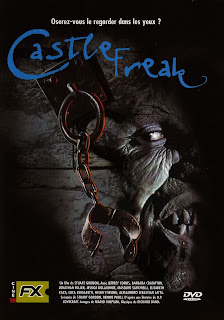 Not so much loosely based on HP Lovecraft’s The Outsider (written in 1921, published in 1926) as it is deeply inspired by it, Stuart Gordon’s Castle Freak tells of troubled couple John and Susan (Jeffrey Combs! Barbara Crampton!) and their blind daughter who travel to Italy to sell off an ancient castle John inherited from his aunt. Not long after they arrive, things start to go bump in the night and strange events occur, not least the daughter's claims that she is visited in the night by a stealthy prowler. When the mutilated bodies of the housekeeper and a local prostitute are discovered it becomes clear that the castle houses a secret inhabitant…

Stuart Gordon is no stranger to the macabre visions of Lovecraft having adapted Herbert West – Reanimator, From Beyond, Dreams in the Witch House and The Shadow Over Innsmouth for the screen. With Castle Freak he didn’t so much adapt The Outsider as take its central themes – and one specific moment – to flesh out a moody Gothic yarn with heaps of atmosphere, food for thought and a cast of cult favourites. Lovecraft’s tale, relayed in a first-person narrative, concerns a mysterious individual who has been living alone in the dank crypt of a castle for as long as he can remember. He articulates his need for human contact and decides to break free from his dark domain. Climbing up, and up, and up, and eventually out of the darkness, he discovers another castle in which a large party is in full swing. When his presence is noted by the guests, they flee in abject terror, making him believe he has been followed by some hideous monster. Staggering around in search of his stalker he catches a glimpse of something not of this world – or no longer of this world – yet to my horror I saw in its eaten-away and bone-revealing outlines a leering, abhorrent travesty of the human shape; and in its mouldy, disintegrating apparel an unspeakable quality that chilled me even more. Almost fainting he falls towards it and feels nothing but the cold and unyielding surface of polished glass: a mirror. 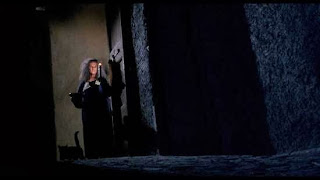 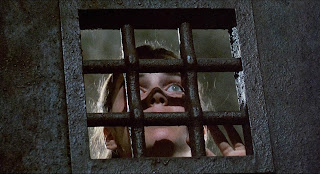 Critics have claimed that The Outsider is one of Lovecraft’s most autobiographical tales, with its strange narrator haunted by his outward appearance, shunned and feared by all who encounter him. Lovecraft expert ST Joshi suggests this is also Lovecraft’s ode to the work of Poe and sure enough, the Gothic influence of Poe has rarely been more pronounced as it is in The Outsider. The entire narrative and core motif of the short story is conveyed in one scene in Castle Freak, where the pitiful creature eventually escapes its shackles in the dungeon and tentatively ventures up into the castle above, moving along a dark hallway with a mirror at the end of it, to eventually catch a glimpse of itself and despair at its own hideous reflection. It’s a moment tinged with horror and sadness, perfectly conveying the monster’s pathetic, pitiable plight. It’s revealed that the creature is man-made – the result of tyrannical parentage and child abuse, locked away in a dungeon for years, only to escape when a new family takes up residence. Lovecraft’s own mother was reputed to have commented on her son’s ‘hideous face’ on more than one occasion… 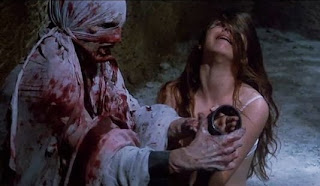 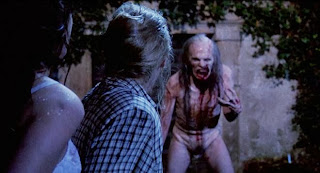 Gordon injects Castle Freak with the Lovecraftian theme of the past returning to haunt the present, with an ancestral home revealing dark family secrets (as in The Festival and The Rats in the Walls to name but two) and a central character becoming embroiled by horrors from his family’s past. Indeed, John’s own dark past and complicated back-story is deftly revealed in a dream sequence depicting the car crash that killed his son. Links between John and the cellar-dwelling creature are also made clear in a moment, dripping with notions of Freud’s ‘primal scene’, when John discovers the family crypt and sees a photo of the monster as a child and bearing an uncanny resemblance to his own dead son. Unbeknownst to him, the monster is watching him from the shadows, seeing him as a father figure. When John starts drinking again he brings home a prostitute, and later, when the monster mimics what he saw John doing to her, things take a turn for the bloody. The image of the monster, swathed in a white bed sheet soiled with blood, childishly prodding at the woman is a haunting one. 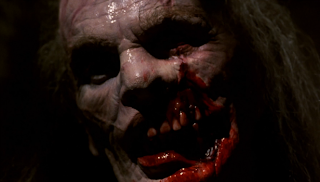 Gordon carefully fleshes out the characters, which are further bolstered by decent performances from Combs and Crampton. Even the minor stock characters such as the housekeeper and the prostitute aren’t your usual stereotypes. Elements of The Shining also trickle throughout proceedings; a highly dysfunctional family (alcoholic father, confused mother, vulnerable youngster) moving to a vast and sprawling location only to encounter horror there, not only at the hands of one another, but from something that has resided there long before they arrived… The third act is essentially compromised of a prolonged and taut chase sequence through the spooky castle, as lighting flashes, thunder crashes and rain lashes.

Castle Freak is the stuff of high gothic horror and yet, typical of Gordon, manages to be fun and deceptively thoughtful, as it brims with subtext concerning the horror of child abuse, familial strife and the violent legacy it can perpetuate.
Barbara Crampton Castle Freak Gothic Horror HP Lovecraft Jeffrey Combs Nineties Film Stuart Gordon The Outsider