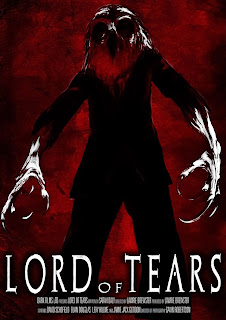 After the death of his estranged mother, school teacher James Findlay returns to his childhood home, a lonely mansion in the Scottish Highlands, in an attempt to lay the ghosts of his past to rest. Tormented since a boy by dreams of a strange and terrifying entity – a figure dressed in Victorian attire, with elongated limbs, sharp talons and an owl head - James faces a descent into madness and his only hope is to banish the evil presence that haunts him. With the help of a mysterious young woman he begins to uncover the chilling truth behind his immortal stalker…

Set in the remote Highlands of Scotland, and inspired by the unsettling and bleak tales of H. P. Lovecraft, Arthur Machen and the creepy Slender Man mythology, Lord of Tears is a gothic chiller that slowly unfurls in an immensely atmospheric and nightmarish manner. Writer Sarah Daly and director Brewster seamlessly fuse together an array of influences – the aforementioned Lovecraftian mythos and Slender Man-like lore, as well as the likes of classic M.R. James style ghost stories, contemporary J-Horror imagery (most evident in some of the later scenes), old folktales and myths, ancient gods and legendary monsters, to create a film that feels wholly original and striking in its scope. Throughout is the unshakable notion that we are somehow witnessing the exhumation of some secret, ancient and dreadful thing, so detailed and authentic feeling is the mythology woven about it. Shades of folk horror abound as James learns that the land around his childhood home is notorious for its tragic and disturbing history, steeped in bygone Scottish lore and pagan ritual. No good can come of him staying there again.

Brewster adopts an effective slow-burn approach, teasing us with glimpses of James’s spectral stalker. As his nightmares intensify, and with them the closing in of a familiar, watching presence, the director creates some truly creepy imagery. The figure of the Owl Man is a deeply sinister one and, much in the same way John Carpenter revealed the presence of Michael Myers throughout Halloween – standing in the distance or on the periphery of the screen (and the glimpses of the Slender Man in online photos) he is so effective because of his stillness; and the patient, dark and quietly encroaching intent this stillness suggests. When he speaks it is through James’s dreams, and his voice is provided by David Schofield (An American Werewolf in London, F) who intones all manner of apocalyptic threats through darkly eloquent verse. 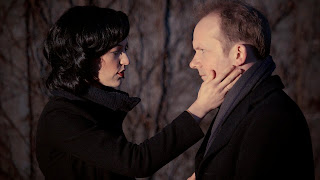 Lord of Tears takes its time to establish its characters and their complex dynamics. James (Euan Douglas) is a man haunted by events in his childhood, racing towards a doomful inevitability evoked through a chilling atmosphere, moody location and a script that reveals its horrors slowly, assuredly and provocatively. Much like the protagonists in the work of H.P. Lovecraft and M.R. James, he is a scholarly loner who buries himself in research and academia. Before long, a strong emotional core becomes evident in his relationship with Eve (Lexy Hulme), a similarly lonely and haunted American woman who has strange ties with his ancestral home. Both struggle to reconcile themselves with their pasts and their tentative interactions provide a little warmth in an otherwise desolate landscape. 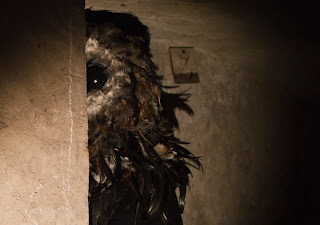 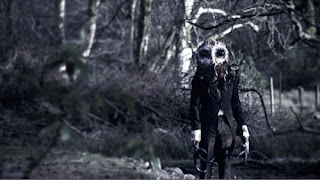 Enhancing the shivery atmosphere is the impeccable sound design which heightens every creaking floorboard and draughty hallway, and the beautiful cinematography which perfectly captures the lonely, bleak beauty of the Scottish Highlands. The score features dark and foreboding soundscapes full of abstract threat, rubbing shoulders with mournful violin solos and moody piano pieces, underpinning the tragedy encircling the protagonists, like vultures around carrion.

Lord of Tears is a truly haunting work and one that marks Brewster and co as filmmakers to keep an eye out for. With its striking imagery, spooky Gaelic-gothic atmosphere, intriguing folklore and creepy-as-hell antagonist, it's a rich and full-blooded ghost story perfect for the dark winter nights ahead.

Also worth mentioning is the packaging and presentation of the film; it comes in a collector’s edition CD-sized digipak brimming with bonus features, including a soundtrack CD and a booklet which provides more background on the vivid mythology of the Owl Man. This is all carefully wrapped in black crepe paper and sealed with an owl's feather. If that wasn’t enough, there is also a downloadable 440 page PDF booklet which covers all aspects of the production. The care and attention to detail that has gone into creating this package speaks of the dedication of the filmmakers to making Lord of Tears a truly unique film experience. 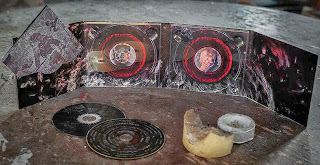 Jay Shatzer said…
I've been dying to check this one out and your write-up has amped that desire, two-fold. Excellent looking stuff!
23 October 2013 at 03:08

James Gracey said…
Thanks Jay. I'd been dying to see it since I first caught a random glimpse of the Owl Man online earlier this year. I was not disappointed - hope you get to check it out soon. Spooky stuff!
23 October 2013 at 20:34

Unknown said…
Very interesting! I will definitely be looking for this one. (PS- I just gave you a shout out on facebook.com/quotethemaven). ;)
23 October 2013 at 20:56