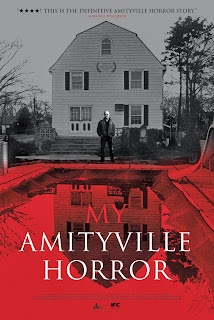 The terrifying paranormal events that allegedly took place in 112 Ocean Avenue, Amityville, inspired Jay Anson’s 1977 book The Amityville Horror: A True Story and the 1979 film The Amityville Horror - and its seemingly unending barrage of sequels and remakes. Over the years the validity of the alleged occurrences has been the centre of intense debate and scrutiny, with the Lutz family branded opportunistic frauds. Prominent figures involved in the investigations, from journalists and parapsychologists, to news producers and psychologists, have since weighed in with their opinions, accusations and theories regarding the family and what they claim happened in the house.

Eric Walter’s recent documentary is interesting because it features a subject who has remained silent about the whole debacle since his involuntary involvement in it as a child. Daniel Lutz was 10 when he moved to 112 Ocean Drive, and what becomes obvious from the outset of My Amityville Horror is that, regardless of what exactly occurred in that house, it has left him psychologically damaged beyond repair.