When she becomes acquainted with softly spoken oddball Wilbur Whateley (Dean Stockwell), little does perky student Nancy Wagner realise that he plans to use her in a ghastly ritual to summon forth the Old Ones; ancient entities slumbering in another dimension, waiting until the stars are right so they can return to earth. And mate.

Based on Lovecraft’s story of the same name (written in 1928, published in 1929), this was Daniel Haller’s second adaption of the author’s work, following on from Die Monster Die. Lovecraft’s story concerns Wilbur Whateley, the son of a half-witted albino mother and ‘unknown father’ and the strange events that surround his hometown of Dunwich. Wilbur is instructed in the ways of the occult by his fiendish grandfather and eventually attempts to acquire a copy of The Necronomicon to help him summon the Old Ones. Cattle, and people, go missing in the surrounding area and there’s talk of something hiding in the Whateley house, growing so big it occupies the entire interior. When Wilbur is killed trying to steal a copy of The Necronomicon, the bulging and entirely invisible entity living in the house bursts out and wrecks destruction throughout the surrounding countryside. Various professors of arcane literature from Miskatonic University are summoned to help destroy the rampaging thing; eventually revealed to be Wilbur's twin brother, though it "looked more like the father than Wilbur did." The opening descriptions of the landscapes and countryside around Arkham are amongst Lovecraft’s most atmospheric, desolate and dense, and his descriptions of the vast and writhing ‘Horror’ (all tentacles and bulging, unblinking eyes) is pretty creepy stuff. 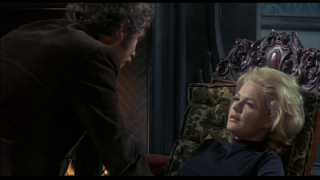 While Haller’s take on the story sticks closely enough to the basic plot, it differs with the inclusion of Sandra Dee as Wilbur’s love interest, Nancy. There are actually very few female characters in Lovecraft’s work, let alone female characters who act as love interests for the male protagonists – Lovecraft’s leading men were austere and scholarly and had no time for such dalliances. As mentioned, the basic elements remain intact, such as the revelation that both Wilbur and his brother (the titular Horror) had been born from a ritualistic encounter between their mother and something not quite human, and Wilbur’s attempts to gain The Necronomicon and use it in a ritual to summon the Old Ones, only to be stopped by scholars from Miskatonic University. At times the film possesses a Corman-esque quality (not surprising, he produced it), particularly in the interiors of the Whateley house and the matte painting of the cliff top temple, which bears a resemblance to imagery glimpsed in a few of Corman’s Poe films. The inclusion of the idea of whippoorwills as soul collectors, their chirping coinciding with souls departing from mortal bodies, seems thrown in for the hell of it, whereas in Lovecraft’s story, the presence of these birds was a reminder of the weird atmosphere abounding throughout the lands around the Whateley house. 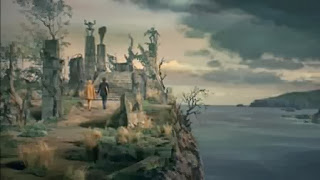 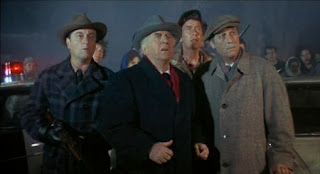 Haller does muster a wonderful Lovecraftian atmosphere at times – indeed, the ingenious opening title animation perfectly captures the Lovecraftian notion of some vast, unknowable entity rising up out of what we perceive to be normal and devouring us, as the landscape two silhouetted figures climb across reveals itself to be a living thing. Some of Lovecraft’s occult ritualism is successfully evoked in the third act, as Wilbur reads from The Necronomicon and prepares Sandra for a mating ritual with whatever unspeakable terror he calls forth. Elsewhere the pacing and tone are uneven and there are moments of utterly turgid dialogue – case in point “Why don’t you take this copy of The Necronomicon and return it to the library, hmm?” There are also 'far out' dream sequences in which Nancy is menaced by frolicking hippies on a giant bed in a field, filmed through weird filters. The conviction of Stockwell et al manages to maintain a sense of intrigue though, as does the lurid promise of the revelation of what is hiding in the attic room of the Whateley residence… Much like certain scenes in Die Monster Die, Haller piles on the trippy visuals and psychedelic effects when the Horror is finally revealed. Dean Stockwell’s performance is strangely mesmerising; half tongue-in-cheek, half deadly serious, he does sinister-suave very well. His incarnation of Wilbur Whateley is nothing like that as envisioned by Lovecraft though; in the short story Wilbur was a socially-inept in-bred mutant who just about got away with venturing into the town of Dunwich, striking fear and repulsion into those who cast eyes on him. 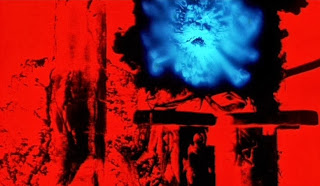 Lovecraft was deeply inspired by the Welsh author and mystic, Arthur Machan, when penning The Dunwich Horror. Machan’s weird tales - including The Great God Pan, The Novel of the Black Seal and The White People – often featured the revelation that a strange central character was not of human parentage. Lovecraft actually came under fire from critics at the time who viewed the uncharacteristic ending of the tale – good defeating evil – as a sell-out. Others claim The Dunwich Horror is intended as a pastiche of the weird tales of Lovecraft’s contemporaries, indeed, of his own work.
Adaptation Cosmic Horror Dean Stockwell HP Lovecraft Roger Corman Satanic Cult Seventies Horror The Dunwich Horror Wilbur Whateley