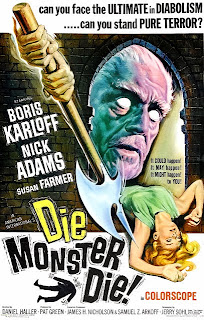 Loosely based on HP Lovecraft’s short story The Colour Out of Space, Die Monster Die revolves around hunky All-American scientist Stephen Reinhart, who travels to England to visit the family home of his dreamy fiancé, Susan Witley. He discovers the locals shun the Witley place and eventually happens upon the source of the family’s spooky reputation around town; Mr Witely (Boris Karloff) has hidden a luridly glowing meteor in his basement, and is using its radioactivity in hideous experiments on plant and animal life. Horrific consequences ensue, particularly when it becomes apparent the house’s occupants have been affected by the meteor too…

When Lovecraft was writing The Colour Out of Space (1927) his intention was to fashion a story which dealt with something entirely outside of human experience or comprehension. The titular colour is eventually revealed to be a living entity and the horror Lovecraft weaves not only seeps out of the colour’s effect on the unfortunate souls who encounter it (physical and psychological deterioration) but from the fact that when the story closes we still have no idea what the colour is, where it came from or if it was even sentient. The hopelessness, despair and terror the characters (a simple family of farming stock) experience is powerfully evoked through Lovecraft’s insistence that what is happening to them cannot be understood. Or stopped. They are isolated and beyond help and one by one gradually succumb to madness, decay and death.

Haller’s adaptation takes the core concept of Lovecraft’s tale – a meteor crash lands on earth and has a devastating effect on those who discover it – but the director seems more interested in imitating Corman’s Poe cycle (right down to the beautifully atmospheric and swirling title sequence a la Pit and the Pendulum), which was in full flow at the time and incredibly popular. That’s not to say the film isn’t enjoyable, or good, but considering the powerful source material, it’s a little disappointing. Lovecraft’s favourite setting Arkham has been relocated to England and things take a turn for the clichéd as soon as Reinhart arrives and asks for directions to the Witley estate. He is met with the kind of hostility and unhelpfulness men like him meet when they ask for directions to shunned abodes in films like this. As he eventually nears the house he encounters a ‘scorched heath’; a barren landscape where no life or vegetation grows. This heath wields a creepy effectiveness in Lovecraft’s story – we just know something unspeakably awful has happened here – but Haller fails to evoke such feelings of dread in Die Monster Die.

The house itself is right out of a Corman Poe adaptation; all mist enshrouded grounds, candelabrums and shadowy, cobweb-bedecked hallways. The patriarch is fittingly menacing, and despite his age and frailty, Boris Karloff still manages to exude a knowingly dark charm and sinister candour. He is most inhospitable to his daughter’s fiancé, while his wife beseeches Reinhart to take Susan away from the house before it’s too late. The slow building mystery is fuelled by the locals’ reaction to Reinhart arriving to visit the Witleys, talk of a missing maid, Mr Witley’s insistence that everyone must keep out of the greenhouse, otherworldly screams of anguish piercing the quiet night, and Susan’s frequent glimpses of a shadowy figure stalking through the darkened rooms and peering in through windows. It’s all high gothic hokum, but has enough style, intrigue and, of course, Boris Karloff to hold the attention. Lovecraft’s influence really seeps into it when we glimpse the ‘zoo in hell’ - the results of Karloff’s experiments.

This was one of the author’s first stories to merge elements of horror and sci-fi, and while Die Monster Die succeeds as a gloomy gothic melodrama with weird sci-fi elements, it fails to successfully evoke Lovecraft’s doomful hopelessness. It does pick up on a common Lovcraftian theme though - the notion that the sins of the father are visited upon the children. Mr Witley’s great grandfather dabbled in the occult and was reputedly a warlock, which explains why Karloff’s mind is so easily corrupted; he himself is revealed to be dabbling in creepy experiments in the vast basement of the house.

Some vivid imagery pierces the gloom - a strangely pulsating glow emanates from the greenhouse (which houses all manner of botanical nightmares) and the make-up and lighting when the effects of the meteor on the Witleys are revealed; Karloff becomes engulfed/possessed by the colour from the meteor and this is realised through in-camera trickery and weird lighting. Moments of intrigue lurk amid the dank gothic trimmings, but overall Die Monster Die relies too much on exposition and underdeveloped ideas. That said, it’s still enjoyable b-movie fodder rife with rubber bats, killer plants, creaky skeletons and crashing thunderstorms.
Adaptation Boris Karloff Die Monster Die Gothic Horror HP Lovecraft Mad Scientist Sixties Horror The Colour Out of Space