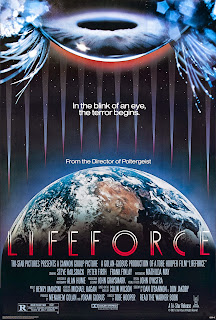 Nestled amidst the wildly uneven yet marvellously unrestrained film work of Tobe Hooper is Lifeforce, his 1985 adaptation of Colin Wilson’s cult 1976 novel, The Space Vampires. An audacious amalgamation of sci-fi and horror, Lifeforce revolves around the discovery of slumbering humanoid aliens in the tail of Haley’s Comet and the terror they unleash when brought back to earth for study.

A critical and commercial flop upon release, Lifeforce has undergone something of a reappraisal in recent times. Co-written by Dan O’Bannon, it’s a solid B-movie that mesmerises with its sheer audacity, abundance of effects, intriguing ideas, bizarro chutzpah and, well, space vampires!

Head over to Exquisite Terror to read my full review of this cult classic.

While you’re there, why not pick up an issue of Exquisite Terror, an independently produced periodical with an academic, analytical approach to cinematic horror. Issues 1 - 3 are available now, and issue 4 is available to pre-order very soon.
Dan O'Bannon Eighties Movie Exquisite Terror Horror Sci-Fi Space Vampires Tobe Hooper Vampires