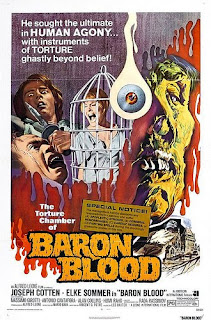 Headstrong student Peter Kleist (Antonio Cantafora) travels to his ancestral home Castle Kreuzenstein in Austria to take a break from his studies. Peter has become obsessed with Baron Otton von Kleist, a distant relative whom the locals nicknamed Baron Blood due to his masochistic and murderous tendencies. Our foolhardy student sets about resurrecting his ancestor by reciting an incantation on an ancient scroll and before long the Baron is up to his old tricks, wrecking bloody havoc and slaughtering anyone who stands in his way… Can Peter and art restoration expert Eva (Elke Sommer) put a stop to his murderous rampage before its too late?

Baron Blood was filmed after Bava’s stylish and grisly slasher opus Bay of Blood and was one of the director’s last films. It delivers what one might expect of a Bava film (or perhaps any Italian horror film) from this period – stylish camerawork, uneven pacing, evocative score, light plotting and dazzling atmospherics. While certainly not one of Bava’s finest films, Baron Blood still contains many visually striking moments courtesy of Bava’s ability to conjure up an indelibly haunting atmosphere with his unequalled use of eerie lighting and masterful camerawork. Great use is made of the limited locations, particularly the scenes that unfold within the confines of the Gothic castle and as a result the film is imbued with an unshakable sense of claustrophobia and stifling dread. 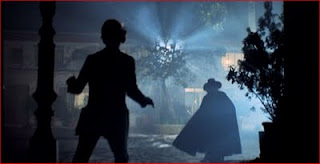 One of the most memorable scenes occurs when Eva is pursued by the bloodthirsty Baron through the moonlit, foggy streets of the town. Bava’s use of atmospheric lighting and imaginative camerawork really heightens the tension in this nightmarish scene. Even though it takes place outside the castle, it still feels as claustrophobic and suffocating and plays out like a twisted Escheresque nightmare. No matter where Eva turns the Baron is always close by...

As with the majority of Bava’s film work within the horror genre, Baron Blood is also rife with moments of jaw-dropping sadism and sexually charged elements. It eventually transpires that the Baron was cursed by a woman he had burned as a witch, to suffer the same torture and pain as his many victims. The scene in which the spirit of this woman is invoked by a medium plays out as a weird and exotic dream, with her haunting and enraptured features appearing in a fire to give guidance to Peter and Eva. 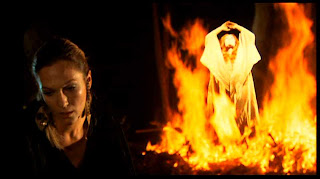 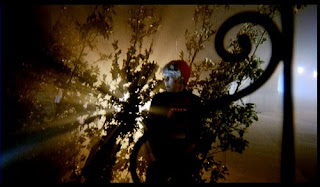 Vincent Fotre’s screenplay does well to elevate the Baron to the status of Vlad the Impaler – the mere mention of his name is enough to drive fear into the hearts of those who hear it. The atrocities he committed during his reign are legendary in this area of Austria. His appearance is striking to say the least and he exudes a strange menace whenever he appears. Decked out in a flowing cloak and wide-brimmed hat hiding his horribly charred and mutilated features, his horrific visage contrasts rather provocatively with the contemporary wardrobes and attitudes of the other characters. A couple of vicious murders pepper the story and one in particular, involving a gruesome hanging, still packs a nasty bunch.

Aside from the astounding atmosphere and artful approach of Bava in his direction, the film flounders slightly and is nowhere near as compelling as say Black Sunday or Kill Baby Kill. Events soon become a little repetitive as the Baron offs someone meddling in his affairs and Peter and Eva try to figure out how to stop him. Having said that, Baron Blood is still an entertaining slice of Italian Gothic and provides yet another example of Bava’s exemplary ability to create stylish, atmospheric and nightmarishly beautiful films that look and feel as unique today as they did when he produced them.