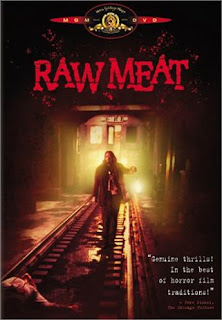 When students Alex and Patricia (David Ladd and Sharon Gurney) find a dying man on the London Underground, naturally they go for help. However, when they return the man has disappeared. Inspector Calhoun (Donald Pleasance) launches an investigation which leads them into London’s murky Underground rail system, where they make a grisly discovery – a group of cannibals that have been feasting on the flesh of London commuters!

Death Line is one of the more interesting and unusual British horror films from the Seventies, with its tale of cannibalism in the London Underground and a scathing, scarily accurate commentary on the British Class system.

The sleazy opening follows a smartly dressed, dapper 'gentleman' on a trawl through the seedy, neon-drenched streets of Soho, as he wanders through various peep shows, propositioning various women before venturing into the London Underground where he is attacked by an unseen assailant. The grimy demeanour of the Underground is milked for maximum effect here and sets the moody tone of the film. As recent films such as Creep and Midnight Meat Train have demonstrated – Underground rail systems make for suitably atmospheric locations in horror films. By day they are bustling with preoccupied commuters and there is never a quiet moment. However at night, when things quieten down – and the imagination goes into morbid overdrive, they become vast, empty expanses where potential threats lurk and creep about every dark corner and just-out-of-sight space.

Sherman’s script is razor-sharp and delivered with aplomb by Pleasance, who relishes his snarky role. As the tea-obsessed Inspector Calhoun, Pleasance commands attention with droll delivery that is at times comically off-kilter as he sprays his fellow cast with sarcastic one-liners, barbed with spiking wit and vitriol. The film is his and he provides what is arguably one of the best performances of his career. His banter with Detective Sergeant Rogers (Norman Rossington) provides the otherwise grim, bleak film with a warm core and light, unobtrusive comic relief.

As ‘The Man’, Hugh Armstrong is initially a gruesome figure of fear. His loathsome, pustule-flanked visage incites disgust and repulsion. However, after a rather lengthy and really quite impressive camera trek around his dingy, eerily lit underground lair – taking in an abundance of rotting corpses, rats and blood-soaked paraphernalia – we are eased into his world to steal a momentary glimpse. And what we see is quite surprising. A strangely sad and lonely figure, The Man tends to his dying partner and eventually mourns her death. We later discover that he and ‘The Woman’ were the last descendents of a group of workers buried alive during a cave-in in 1895, and left to die by employers who went bankrupt. Surviving on the dead and breeding amongst themselves for generations, this clan has eventually died out. Its last survivor, The Man, now ventures into the surrounding tunnel systems looking for food. And now that his partner has died, he needs a new one. He now appears to be a tragic victim, and becomes strangely sympathetic – despite the ‘monstrous’ acts he has carried out. It is all he knows and he represents a form of humanity whittled down to its pure essence that will do anything to survive. 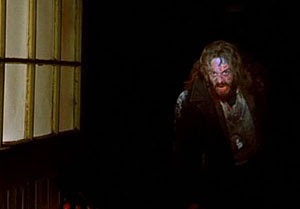 The film isn’t really hampered by a number of plot holes: the caved-in workers were able to reproduce before being eaten by one another? For five generations? And if they have been surviving on the odd London commuter here and there, for this long, wouldn’t that bring attention to them? And if they can move around in the tunnel system in order to get at the commuters, why not just leave and go to the surface? These are just a few questions the script fails to answer, however, with such a compelling story they are not the hardest inconsistencies to overlook.

As mentioned, the film also takes pot shots galore at the British Class system. The Civil Servant trawling Soho for cheap kicks to sate his lust is feeding, figuratively, off the desperate and the vulnerable. The ‘showdown’ between Calhoun and a shady Upper-Class MI5 Agent (Christopher Lee in a memorable cameo), plays on the vast class differences between the two men. And of course there is Calhoun’s initial distain of the students. Each faction of society feeds off the other to further their own gain and social standing – including the cannibals – who literally feed off society – but do so indiscriminately.

Whilst the film does begin to plod in a few places, Sherman continuously draws us into the story with consistently fresh dialogue and the cast provides a number of sturdy performances – notably Pleasance. The sound effects that occur throughout proceedings also create a dank, unsettling atmosphere and things are rarely quiet – even in the forgotten underground lair with its constant dripping, echoing and distant clacking noises. A highly unusual score courtesy of Wil Malone, which is by turns sleazy, funky and sufficiently brooding, also adds to the overall despairing feel of the film. As events move, albeit in their own sweet time, towards the genuinely suspenseful climax, Death Line proves to be a memorable, strangely moving and thoroughly captivating ride.

A grimy jewel in the jostled crown of Seventies British horror cinema.

Click here to check out the opening theme music to Death Line...

Guillaume said…
I'd love to see this film!
It is probably a forerunner of many subway films like CREEP,END OF THE LINE...

Anonymous said…
That looks interesting, don't think I'd heard of it before!

I Like Horror Movies said…
I was so happy to find this film a little over a year ago, it is definitely a fun little slasher and clearly influenced British filmmakers like Neil Marshall even decades later. I cant help but draw likenesses between this one and CREEP as well, thanks for another great review James!
29 October 2009 at 04:41

James Gracey said…
This was definitely a forerunner to the likes of Creep, End of the Line etc. In many ways it is typical of British horror films from the Seventies - but in so many other ways it is a little superior. I've seen it a few times now and it never fails to provide chills. And of course there is Donald Pleasance - this is probably my favourite role/performance from Pleasance - he's such a grumpy old curmudgeon - but still so funny and likable. 'Get your hair cut!'
29 October 2009 at 11:13