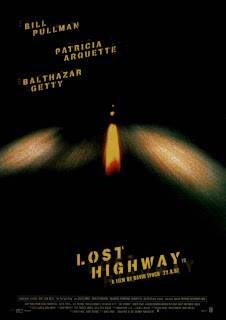 David Lynch’s beautiful, nightmarish and deeply unsettling Lost Highway contains more than its fair share of intense and disturbing moments. The opening scenes alone are, in my opinion, amongst some of the most uneasy, upsetting and creepy moments of cinema. Lynch effortlessly creates such a feeling of anxiety in these opening scenes, and all without anything much really happening. Unhappily married couple Fred and Renee Madison (Bill Pullman and Patricia Arquette) blankly wander around their dark and foreboding home. Fred appears to suspect Renee of being unfaithful and she does nothing to alleviate his suspicions. Videotapes containing footage of the outside of their house begin arriving. Eventually one of the tapes contains footage shot inside the house and reveals Fred murdering Renee. A bizarre encounter with a mysterious man at a party flings events further into overtly abstract territory. The mystery man tells Fred they've met before. Where? "At your house, remember? In fact, I'm there right now." Where? "At your house." The mystery man then tells Fred to dial his own house, which he does, and the man picks up on the other end. Creepy.

To progressively complicate matters, Fred is then arrested and just before his execution he appears to morph into Balthazar Getty (we’ve all been there) as Pete Dayton, a young mechanic with sporadic amnesia and a penchant for gangster’s moll Alice (Arquette again). 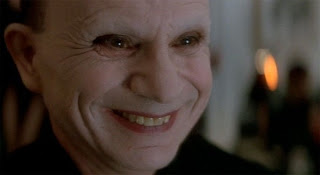 The lives of Fred and Pete seem indelibly linked and strangely cross-referenced.
To try and provide a somewhat ‘succinct’ synopsis of this film would be to do it a great injustice. Lynch is primarily an artist and he often views his film work as an extension of his canvas. As such, Lost Highway is a dark and bleak voyage into one man’s depths of despair as he attempts to understand the workings of a world seemingly against him.

As Fred and Renee view the videotapes and things become even more steeped in anxiety a most discomforting and downright disturbing sex scene occurs. Seeming to highlight Fred’s unease and paranoia with his own wife, the scene plays out as he unsuccessfully attempts to make love to her. She rather tries to comfort him, and pats him on the back and says ‘its ok.’ As Fred turns to look at her he sees, for a split second, the face of the mysterious man who will confront him at the party…
What serves to make the scene even more perturbing is the soundtrack: a seemingly constant low rumbling drone that seeps into the subconscious and nestles there with dreadful intent... 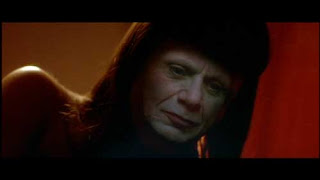 Sex in the films of David Lynch often appears to have an underlying sense of creepiness and despair and is nearly always revealed as an insidiously sinister situation (Eraserhead, Blue Velvet, Fire Walk with Me). Never is this notion highlighted so much as in the opening scenes of Lost Highway that depict a marriage in crisis and unfurl as one of the most upsetting examples of marital strife and anxiety in film. Lost Highway is guaranteed to perplex, disturb, inspire and provoke with each successive viewing…
David Lynch Lost Highway Random Creepy Scene

Anonymous said…
Well I think you did a fine job wrangling the plot into something definable. I saw this film in theaters and haven't given it a glance since. I think it's about time for a revisit!
7 October 2009 at 18:10

a bizarre encounter with a mysterious man at a party (who hands Fred a phone with, er Fred on the other end of the line)

James Gracey said…
Durh! Ed you are in fact right! How could I have made such a glaring error!? Hats off to you my man. And therefore you win the prize. ;)

Christine, judging from the rather large faux pas in my post, you won't be the only one revisiting Lost Highway again soon! Give it another chance and just go with it. Hope you enjoy it.
8 October 2009 at 10:25

mge said…
The telephone scene in which the mystery man calls himself is quite disturbing. However, I think the scene usually known as "the man behind Winkie's" from Mulholland Dr. is even worse in terms of horror.

James Gracey said…
Yes mge, I know the scene you mean. Truly creepy - may have to post something about that in the future.
I also think a number of scenes from Fire Walk With Me are amongst some of Lynch's most unsettling - particularly the scene when Laura enters her bedroom to find 'Bob' behind her wardrobe...
Thanks for stopping by.
8 October 2009 at 21:57

Cody said…
The scene with Fred and Renee attempting to make love is one of the scariest bits of film I've ever seen. It deeply unsettles me every time I watch it.
18 March 2011 at 20:33

Cody said…
I like what you wrote about sex in David Lynch films as well - I've always thought that was the case but not many reviewers touch upon it.
18 March 2011 at 20:35