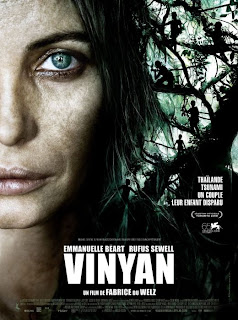 The lives of Jeanne and Paul Bellmer (Emmanuelle Béart and Rufus Sewell) are thrown into chaos when they think they see their son, thought drowned in the Southeast Asia tsunami in 2004, in a film about orphans living in the jungles of Burma. They set off into an impenetrable heart of darkness in search of an elusive and perhaps unattainable truth, aided only by human traffickers who are intent on exploiting their heartache. Stranded in the middle of a strange and hostile country, the couple are besieged by a band of feral children and begin to lose sight of the hope they once so desperately clung to.

‘When someone dies a horrible death, their spirit becomes confused and angry. It becomes…Vinyan.’

Vinyan unfolds as a strange reflection of Don’t Look Now in its exploration of a couple’s grief, denial, hope and obsession as they try to come to terms with the death of their child. The story tracks Jeanne and Paul’s personal descent into the maelstrom as they frantically search for a child she still believes to be alive and now a victim of illegal human trafficking. Paul however isn’t so sure. Emmanuelle Béart gives a staggering performance as a grief-stricken woman holding on to the last fading shards of hope with all she has. The sense of helplessness and isolation that dogs the Bellmer’s movements through Burma is permeable. Strangers in a foreign, hostile and inhospitable land, they are completely at the mercy of a group of human traffickers, whose only purpose in offering to ‘help’ the couple is to extract as much money from their loss as they can. 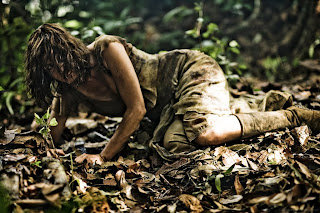 A beautiful looking and evocative film, Vinyan is lensed by Benoit Debie (who was also director of photography on Dario Argento’s The Card Player and Gasper Noe’s Irreversible), who pays an unparalleled amount of attention to lighting and atmosphere, ensuring the visuals are quite often disorientating and disquieting, yet utterly compelling. An astounding array of breathtakingly haunting and strangely beautiful images lace the film; from the strange series of islands the ship sails past evoking Böcklin’s Isle of the Dead, to the shot of Béart standing on the bow of the mist-shrouded ship at night, backlit by an ominous glow and staring in awe and quiet dread at the figures of small children standing on the dock – a moment that is as immensely creepy as it is beautiful.
The spooky and sadistic feral children featured in Vinyan are amongst the most haunting, and haunted, in horror cinema.
Another dreamlike and rather ethereal scene features Béart wandering along the beach the night before they set off into the jungle, watching locals light lanterns in a memorial service for the dead – the eerily beautiful lanterns float up into the dark night sky and are supposed to guide the spirits of the dead to the afterlife. The man who is to guide her through the jungle in search of her son, asks her to light a lantern so his soul may pass into the after-world; a sinister sign of things to come? Or his way of asking for her forgiveness for knowingly exploiting her pain? It is also during this moment that he explains to her what happens to the confused and angry spirits of those who die a horrible death... 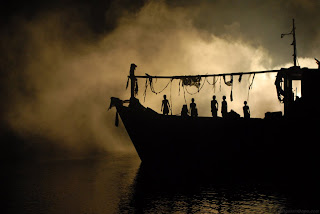 The film’s sound design ensures there is never a quiet moment: from the frenetic and flinchingly unnerving techno music in the infernal nightclub scene to the spooky noises that permeate the jungle Jeanne and Paul wander through, to the times it even seems to echo the blood rushing through their heads in moments of creepy solitude.
The score, courtesy of François-Eudes Chanfrault does a fine job of enhancing the hallucinatory visuals and creating a nightmarish and at times ethereal atmosphere. Even the film’s opening credits prove alarming, with their manic soundtrack of ‘something’ building to an all-consuming crescendo of destruction.

The stifling and troubling images that stalked through Lord of the Flies and Who Could Kill a Child? are evoked here in what unfolds as a metaphysical voyage into the dark heart of a marital breakdown, brought about by the death of a child. Director Fabrice Du Welz takes his time and slowly lowers us into the midst of the carefully unfolding drama. The languid pacing serves to further embroil us in the film’s clammy clutches, making it all the more difficult to forget. Welz is astute at building and maintaining an air of unease and tension throughout. The first two acts use a subtle approach to accentuate the quiet menace and mental anguish that surrounds the couple as they each deal with the situation in their own individual ways. Once into the third act however, the film goes for the jugular with scenes featuring a small army of feral youngsters surrounding and pursuing the protagonists. Events culminate in a, quite literally, Romeroesque gut-wrenching moment that startles events out of the contemplative approach they had yielded, and into more visceral territory. However the film’s power is more evident in the aftermath of this scene, in a quiet moment where Jeanne seems to give herself over to a strange force that has been with her since the start of this story and allows herself to be absorbed completely into a heartrending and dangerous new existence. 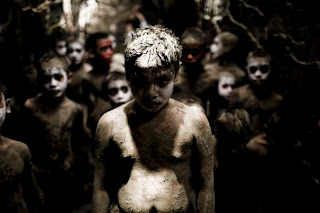 A beautiful, blood-dark and haunting film that is at times as impenetrable as the jungle in which its heart-bruising story unfurls. Some viewers may find it overly ponderous; however those who stick with it and allow themselves to be immersed in its darkness will find themselves in a curiously moving and rather unsettling space afterwards.
Burma Feral Children French Horror Film Grief Old Dark House Parents Grieving Psychological Horror Robert Fuest Survival Horror Vinyan: Lost Souls

I Like Horror Movies said…
I have only heard awesome and terrible things about this film, but I cant wait to see it, have it towards the top of my que
15 October 2009 at 06:14

James Gracey said…
Hey Carl. I just happened upon it in my local video shop after reading quite a positive - though deliberately vague review - and quickly decided to rent it. Glad I did, as it turned out to be quite the experience. It can be somewhat 'ponderous' in places, and arguably a little self-indulgent, but its incredibly atmospheric and Emmanuelle Beart's performance is so touching.
15 October 2009 at 10:07

James Gracey said…
Hmmm. I haven't seen this film since reviewing it back in 2009 - about 6 or 7 years ago now? I can still remember certain moments from it, and I obviously quite liked it at the time. I'm not sure I would agree with you about it being a huge misuse of money though, or it being a black mark on the careers of its stars considering Sewell went on to appear in stuff like Abraham Lincoln: Vampire Hunter and Gods of Egypt. Surely these two films (which obviously cost a hell of a lot more than Vinyan) would be more of black mark on someone's career than a relatively obscure, supernaturally-themed little film about parental grief?
16 January 2017 at 13:05