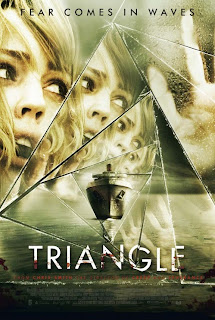 Tired and put-upon Jess (Melissa George) takes some much needed respite from taking care of her young autistic son to join her friend Greg (Michael Dorman) on his yacht for the day. They are joined by a group of Greg’s friends. Their day is shattered when the boat is capsized in a freak storm. They eventually see a huge ocean liner and board it to seek help. Once on board though, it gradually dawns on the group that all is not what it seems and something very ominous is afoot...

Director Christopher Smith is no stranger to horror, having already directed Creep - a genuinely chilling and taut horror set in the London Underground that offers plenty of monsterous mayhem - and Severance – a morbidly humorous and very splashy horror about a corporate team building excursion that goes very, very wrong. With Triangle though, Smith keeps things very sombre and gradually builds an overwhelming mood of quiet dread and foreboding before unleashing a highly suspenseful – and equally complex – series of events that grasp one’s attention in a vice like grip all the way to the bleak, heart-shattering denouement. The opening scenes depict a distracted Jess trying to get ready for her sailing trip. At this early stage we are given a brief glimpse that leaves no doubt as to how much her son means to her. He is seemingly her world and before leaving she hugs him in a moment that sets the strangely upsetting and doomful mood of the film. It is obvious from the outset that things are NOT going to end well. On board the yacht we are acquainted with the other characters before all hell breaks loose in the freak storm - a genuinely panic-inducing scene. Jess is strangely detached and can’t shake the feeling of déjà vu. To begin with the others believe this is just because she is exhausted and feeling guilty for leaving her son for the day. However, as soon as the survivors board the ocean liner after their yacht is capsized, it becomes clear that events are not going to dissolve into sub-par slasher territory. As they explore the vast, creaking behemoth, it initially appears they have been thrust into some paranoid nightmare with people suddenly turning on one another, doppelganger sightings and numbers quickly dwindling. Without wanting to give too much away – though the trailer arguably already does this – Smith morphs fleeting elements of films such as Donnie Darko, Primer, Memento and The Shining into a moody, mind-meltingly twisted film. Apparently it took the director four years to write Triangle – and an abundance of post-it notes, no doubt. Not surprising really, given the film’s complex plot that winds and snakes around and back on itself. 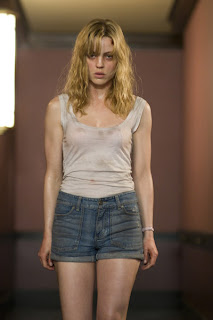 The scenes depicting the group exploring the ship are genuinely unsettling: the soundtrack is full of menacing creaks and moans and the camera appears to stalk and glide after the group, switching every now and then to sneak glances at them from around corners and over railings. The interior of the ship at times bears a striking resemblance to the Overlook Hotel, with its labyrinthine corridors and gloomy atmosphere – there is even a blink and you’ll miss it reference to The Shining in the number on the door to a room where unspeakable things will happen.

Indeed the similarities to The Shining don’t stop there, as Triangle unfolds offering up ideas of history repeating itself and characters wandering through a veritable purgatory; doomed to relive ghastly memories and ghoulish happenings over and over again. At one stage the group discuss the name of the ship – The Aeolus – giving those with a penchant for Greek mythology a clue as to what is unfolding. Even if you aren’t familiar with the myth of Sisyphus, it shouldn’t hinder your enjoyment of a genuinely engaging, provocative and very troubling film.
As soon as the scene has been set and our group have been cast into the nightmarish bowels of the ship, Smith kicks events up a notch with startling and genuinely ‘sit-up-in-your-seat-to-pay-attention’ twists that continue to twist evermore throughout the course of events. The film’s strong point is its willingness to engage audiences and attempt to make them think and follow events closely to ascertain a possible outcome as situations double back on themselves to reveal alternate viewpoints and timescales - the fractured pieces eventually bleed into a concise and disturbing whole. Bewildering at times yes, but all the more rewarding and enriching the experience because of it.

At certain points ‘signposts’ come thick and fast, but more surprises and revelations are soon thrown into the mix, and a distressingly intense and ultimately bleak finale. 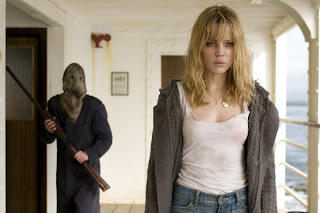 As the distraught Jess, Melissa George gives a flawless performance – displaying the right amounts of vulnerability and determination to survive, as well as providing a deeply troubling portrayal of a haunted woman coming apart at the seams, trying to change the past while gradually coming to terms with the realisation that her fate is sealed. A complex character with all-too-human flaws, she is doomed to repeat the same mistakes over and over, but she also refuses to accept this and her desire to put things right is what drives the story. She is our anchor in a constantly shifting space and thanks to George's performance we are constantly drawn into the increasingly complex web of events as the stakes rise ever higher. A number of moments that occur and subsequently throw light on the sheer magnitude of Jess’s predicament are as chilling as they are heartbreaking and shocking. The film is peppered with arresting images, such as the shot of a shadowy figure standing on the bow of the ship looking down at the up-turned yacht and the revelatory shot of Sally’s eventual fate. The sense of isolation and eeriness that comes from watching Jess wander the deserted, gargantuan vessel – a place that should be bustling with people – simply drips with tension and uneasiness.

A provocative, compelling and disturbing horror that attempts to engage with its audience on an intellectual level as well as a visceral one – Triangle will prompt much debate, discussion – and perhaps most importantly – nightmares for some time to come…
British Horror Christopher Smith Existential Horror Melissa George Ocean Set Horror Psychological Horror The Shining Triangle

Anonymous said…
Just watched it. Found it repetitive - up an down gangways, same scene different angle. So explain please, did any of it ever happen? Did she hammer her alter-ego to death and stuff her/it in the trunk? Did anyone really die? Was it all a fantasy? Much preferred Memento.
26 December 2014 at 09:02