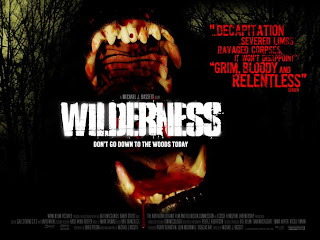 After the suicide of one of their dorm-mates, a group of young offenders are sent to a remote island off the coast of Scotland for some character/team-building exercises. Once there, the wardens are viciously slaughtered by a mysterious assailant commanding a pack of fierce hunting dogs. The group must work together to stay alive and find a way off the island before they too fall prey to the stealthy stalker.

A grim prologue unspools in the young offenders’ centre where we are introduced to the eclectic bunch of mainly unsavoury types. The use of young offenders as main characters adds a refreshing and interesting element to the mix and the prologue expertly introduces us to the volatile young men.

Once the story moves to the island location, it navigates into very familiar Slasher movie territory, and utilises an abundance of that genre’s conventions - right down to the use of a killer extracting revenge for a past misdeed, picking his victims off one by bloody one. The most interesting element of the story is the fact that these are not your average run of the mill teens pitted against a savage killer – this lot have already proved that they could potentially be more than a match for their tormentor. Perhaps this is supposed to reflect just how determined and bloodthirsty the killer is; if he can whittle down such a group of streetwise delinquents? 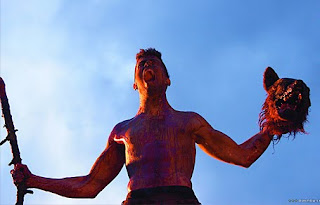 The dynamics of the group are now brought to the fore and initially they all try to remain together to survive. The main problem here is who we are supposed to root for and identify with – if anyone? This motley crew serve as one of the strengths of the film – the various arcs that each character traverses – but the script settles for painting them with ever broader strokes at they each succumb to ever bloodier demises – both at the hands of the killer and each other.
As Calum, Toby Kebbell delivers an outstanding performance that transcends the often rudimentary material, conveying so much through facial expressions and body language. The rest of the uniformly strong cast deliver sturdy performances, especially Stephen Wright and Lenora Crichlow as Steve and Mandy.
And of course, to begin with anyway, we also have Sean Pertwee and Alex Reid. No strangers to the horror arena, and veritable veterans compared to the rest of the cast – Pertwee and Reid had roles in contemporary classics such as Dog Soldiers and The Descent respectively. It would seem no British horror film these days is quite complete without the presence of Pertwee. No bad thing. 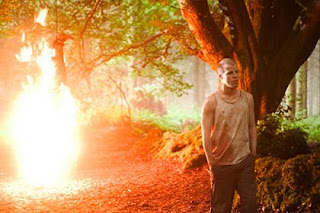 Elements of Deliverance, Scum and Lord of the Flies pepper Wilderness. Notions such as vigilantism and delusions of justice also crop up sporadically, but the script, courtesy of Dario Poloni, fails to address them with any degree of depth and merely flirts with them. Wilderness sticks a little too rigidly to pre-conceived convention. Not that this is detrimental to the enjoyment of the film, but with such good actors portraying such multi-faceted and interesting characters - and such an initially interesting villain - it seems a shame to waste them amidst the abundance of clichés we are presented with. Having said that, the younger characters are arguably afforded more backstory and substance than the average slasher cast.

The isolated and highly moody location – actually Tollymore Forest in Northern Ireland, is pilfered for all its worth and Bassett goes all out to showcase its potentially inhospitable and ever menacing climes.

Events become increasingly nasty – even when the group aren’t attacked by the predator, they still have each other to contend with. An attempted rape and its repercussions lead to yet more bloodshed and splashy FX. Wilderness is extraordinarily gory – notably in the scenes where Pertwee is torn to shreds by attack dogs – and for the most part, the violence is realistic and dirty.
The first glimpse of the killer echoes the feral slayer in The Final Terror - another uneven though pretty engaging backwoods slasher – covered in foliage and blending into the forest with creepy ease. However once he and his motives are revealed, he is stripped of all menace and the once ominous and intriguing figure commandeering a pack of killer dogs is a distant memory. 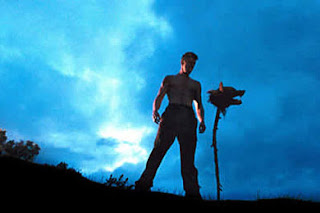 Whilst Wilderness is certainly edgy and entertaining, its reliance on tried and tested horror clichés lets it down somewhat and what we are left with is an average and moderately engaging thriller.

Why not head over to Eat My Brains and read the interview I carried out with the director, Michael Bassett.
Backwoods Slasher Body Count Movie British Horror Slasher Stalk'n'Slash Survival Horror

Matthew Coniam said…
Hi James - don't know if you're into blog awards, but here's one if you are:

James Gracey said…
Thanks very much Matthew - I really appreciate the sentiment. I shall display it with pride and a warm glow in my heart. Many thanks - hope all is well over at Carfax... ;)
3 November 2009 at 11:20

Nick Sayers said…
Wilderness! This was damn good movie. But I do see where your coming from on the cliches and averageness, but it entertained the hell out of me.
6 November 2009 at 04:09

James Gracey said…
Hey Nick - thanks for stopping by. I saw this when it premiered at the Belfast Film Festival a few years back and was rather disappointed. However! It was on TV a couple of weeks back and I decided to give it another go. I enjoyed it, but still think it could have been much better. Such interesting, 'untamed' characters - but they are given nothing to do. It was all just so unsurprising and a bit monotonous. Having said that - it was great to see Tollymore Forest used in a horror flick - i used to go camping there in my formative years. Very cool forest.