Interview with Ivan Zuccon: Director of Colour from the Dark

Italian director Ivan Zuccon is no stranger to the cosmic terrors of H.P. Lovecraft, having already adapted various narratives for the screen in his anthology The Shunned House (2003). Indeed some of the director’s other work such as The Darkness Beyond and Nympha are indelibly imbued with a distinct Lovecraftian feel.
Zuccon’s most recent film, Colour from the Dark (an adaptation of HPL’s short story The Colour Out of Space) really hits the mark and effortlessly transfers that tale of insanity and other-worldly intrusion upon humanity from page to screen. Few other directors who have tackled the oft regarded ‘unfilmable’ work of Lovecraft have done so with such respect and understanding of the source material. Zuccon deftly creates an atmosphere saturated with dread and foreboding, and effortlessly conveys the insanity and darkness that perforates Lovecraft’s tale. Behind the Couch felt very privileged to have the opportunity to talk with Zuccon about his work, his love of horror and the difficulties in adapting HPL for the screen.

Why did you decide to adapt Lovecraft’s The Colour Out of Space? What drew you to this specific story?

The Colour Out of Space is one of my favourite Lovecraft stories, so it was natural for me to try and adapt it for the screen. The most interesting aspect to me was the story of a family struggling with many increasing problems. At the beginning of the story they struggle with the hard life of farming in the cornfields during WWII, and then they have to fight against the strange and dangerous entity that wants to suck out their life-force. It's a family drama, and this is the kind of story I really like. It's great stuff for a filmmaker. 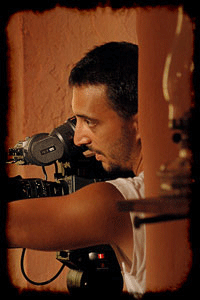 Was it difficult to adapt for the screen?

Yes it was. The problem when you adapt a writer’s work you admire is that you don’t want to betray him. I can say that I have never felt I've betrayed Lovecraft. Never. I have the maximum respect for him and his work and I think I have always respected him with my adaptations. Of course in adapting The Colour Out of Space I have changed some points of the story - I was forced to do this in order to fit it for the screen, but the atmosphere I've created is very close to what he wrote. When adapting Colour I didn’t just focus on the facts, or only on the characters, but also on the mood of the tale. From this point of view I would say my adaptation could be considered very close to Lovecraft’s idea.


Why did you decide to set it in the period of WWII?

Well, Lovecraft's tales are usually tied to the past or to a love of things from the past, so I thought it was the right decision to set my film in the past. Then I decided to set the film during WWII because this choice gave me the chance to analyze the aspects and the differences of the two kinds of evil presented in the tale: the Nazi-fascism and the strange creature from the heart of earth’s womb. I must say I don't know which is the most dangerous. Sometimes they are similar, sometimes they are different. Probably the evil created by man is the worst. The entity from the well has to survive, needs to eat, it follows its instinct just to survive - like all of us.

Do you have any favourite Lovecraft based films?

In the past some good directors have made some nice adaptations of Lovecraft's ideas. One of my favourite HPL inspired movies is John Carpenter's In the Mouth of Madness. It's the kind of film I like, with a multi-layered story, a complex plot and a lot of scary moments. 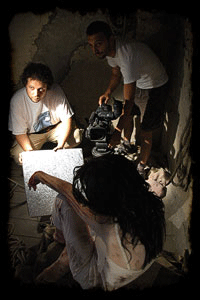 Who or what has been your major influence (if any) as a filmmaker?

When I was a kid I was fascinated by cinema. I really loved Sergio Leone's westerns. I remember planning to shoot a sci-fi western, and starting to write an outline. The real passion however, came years later when I got acquainted with the horror genre. I had always been scared to death of horror movies, but one day I decided to face my fears and watch the movies of the horror masters. I rented ten movies and closed myself in a room, alone with my VCR. I was impressed by Mario Bava, Lucio Fulci, Sam Raimi and John Carpenter. I was mostly interested in the technical side of Raimi's films and the visionary approach of Bava's work. I decided I would make horror movies, because they would allow me to use more creative shooting techniques. I fished out my father's old super-8 camera and shot some very short movies, which I edited myself. It was fun, and very gratifying. Since then I've never stopped thinking about and making films.

What other filmmakers do you admire and why?

I love David Cronenberg a lot. He was my hero. I think he made more than just one film you could consider a masterpiece. Unfortunately I don't like his last two movies, they are standard thrillers and are so distant from the genial works he created in the past. His last film I really loved was Spider, a true masterpiece. I still admire him a lot. He has his reasons for his most recent films, but these choices don't fit my taste anymore.

Do you think Lovecraft can still appeal to modern cinema audiences? What do you think is it about his writing that remains so effective and influential today?

Lovecraft created chaotic worlds that scare all of us. Day by day the real world is becoming more similar to the scary and chaotic worlds of HPL. For this reason his work is even more immediate and appealing to cinema audiences.

Marco Werba scored Colour from the Dark. How did you go about involving him with the film?

Usually films are scored at the end of the whole process, but this is a modus operandi I don't like. For this reason I asked Marco to compose different tracks for all the moods of the film. I selected the tracks I liked and asked Marco to compose material according to the taste of the selected tracks in order to do something similar. It's a very simple path and gave me the chance to work immediately with the final music of the film instead of working with provisional music, a method I've found very frustrating.

What do you think of modern horror films at the moment?

If by ‘modern’ horror you mean those hyper-violent action movies with just few true horror elements, like the Saw saga for example, then I really don't like them.

Apart from Lovecraft, what other horror writers do you like? What is it about their stories that appeal to you?

I've grown up reading William Burroughs and James Ballard, and these two writers have really influenced me as a story teller. This is the reason I like complex plots and multi-levelled stories.

Is there anything in particular that you’d like to adapt for film? What is next for you?

The next project? Honestly I don't know right now. I have a couple of scripts I would like to realize but still nothing in the immediate future. I think I will start working on a new film in 2011. I'm busy as hell right now working as an editor for Pupi Avati.
One thing I can say for sure, my next movie will have nothing to do with Lovecraft. I want to do something different. 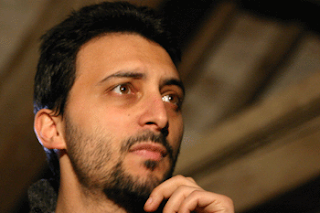 Visit Ivan's website for more information on his work, and why not drop by his myspace page for regular updates on forthcoming projects.

Lysergic Earwax said…
Thanks for posting this interview, I've been completely unaware of Zuccon's films. "The Colour Out Of Space" just happens to be my favourite Lovecraft piece...and this looks like a very interesting adaptation from the trailer. I'll be seeking it out forthwith!
23 October 2009 at 09:42

James Gracey said…
Glad you enjoyed it. Its a very low budget, creepy film - everything about it is low-key - which makes it much more effective.
Thanks for stopping by!
23 October 2009 at 10:53