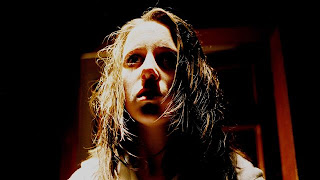 Katie (Jill Harding) is left to babysit her younger brother in the family’s new house in rural Ireland while her parents dine out with her father’s new employer. There is a power cut and Katie calls her father who tells her to go down into the cellar to flip the fuse switch. He attempts to keep her calm as she descends the stairs – only a few weeks prior she had a panic attack in the cellar after a classmate told her the Devil was once seen down there…

Director Brendan Muldowney may employ familiar conventions to tell this sinister tale – a young babysitter, an isolated and spooky house, a power cut, rumours of morbid events from the past and a candlelit descent into a dark cellar - but he keeps things suggestive, creepy and offers us something genuinely memorable and deeply unsettling by the end. Carefully building an atmosphere of mounting dread, he slowly but surely cranks up the tension and distress to almost unbearable levels before the chilly payoff – which will no doubt linger long to wander the viewer’s mind afterwards.

Muldowney obviously favours the Lewton 'less-is-more' approach and sets about creating a creepy atmosphere that gradually pervades the cosy domesticity of the family’s home, rendering it uninviting, unfamiliar and potentially very unsafe. The opening shot of the house elevates it to the ranks of similarly sinister abodes such as Hill House and 112 Ocean Avenue. Use of music is kept to a minimum – Katie’s descent into the cellar is accompanied by eerie sound effects and a constant otherworldly draft. Muldowney deftly creates tension cutting from Katie making her way down into the cellar, to her increasingly anxious parents. As soon as the mother becomes insistent they leave, it is obvious something is very wrong. The throwaway remark from their fellow diner about the Devil’s alleged appearance in the cellar of their new home is effective, understated and indelibly creepy.

A healthy dose of ‘fear of the dark’, the use of old stories and local folklore – a house where the Devil was once seen – combined with a contemporary twist – the use of a mobile phone - creates an effective, suspenseful and disturbing little chiller. The final moment comes like a breath of cold air shuddering down your neck, sickeningly caressing your spine…

James Gracey said…
There's a hell dimension in their basement!!
Or she went insane.