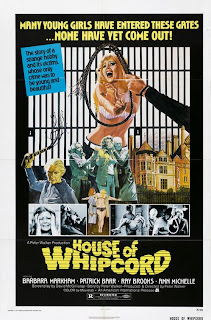 Peter Walker is arguably the greatest unsung hero of British Horror cinema. His grubby, sordid and darkly mischievous films usually form scathing social commentaries rigorously attacking British institutions such as class, family and the legal system. Unapologetic, shockingly violent, strangely thoughtful and extremely anti-establishment in their outlook, Walker’s films were always controversial; indeed the director openly admits his work was deliberately shocking because he wanted to jolt conservative British audiences out of their own skin and raise high his middle finger to ‘The Man.’ A goal he certainly achieved with his tenth film House of Whipcord.

Walker doesn’t so much skim the surface, as plunge us face first into the murky, dank and unsavoury depths of this sordid little tale of young French model Ann-Marie Di Verney (Penny Irving) as she is incarcerated in a prison masquerading as a country clinic. She joins a number of other women forcefully imprisoned here because of their ‘loose’ morals. The prison is domineered by a monstrously psychotic and completely self-appointed governess, an ailing and senile judge and several sadistic and predatory wardens whose unwavering devotion to the Law means certain death and gruelling torture for the inmates. 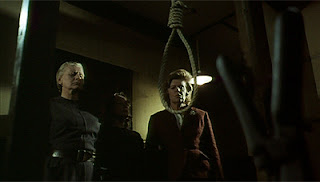 Whilst essentially a ‘Women in Prison’ film – complete with all the sadistic mayhem and ‘titillation’ of that particular subgenre - Whipcord is also one of the director’s most thought provoking, challenging and political films. Walker himself commented: ‘Prison wardens must have an in-built sadism, otherwise why would they do that job? Judges do a holier-than-thou act every day. How dare these people pontificate to the rest of us? They’re getting off on it.’ It stands amongst Walker’s collection of sleaze-coated, grim-infested films as still being extremely relevant today.

Tension is mustered as the tyrannical brutes deal out their idea of appropriate punishment, impervious to the fact that they're breaking both moral and penal laws themselves. And they do so with salivating relish. Heightening the film’s perversity and unsettling power is the fact that the source of horror stems directly from the very laws of society that were established to maintain order and structure and protect its citizens. No amount of pleading or protesting helps – as soon as the women enter the prison, not only are they stripped of their clothes, but also of their dignity and human rights. When we are introduced to her, Anne-Marie is a feisty, free-spirited and good natured individual. Even as she is duped into accompanying her dashing ‘suitor’ to an old country estate that she discovers to be an illegal correctional facility, we are invited to invest in her as a character. She initially stands up to the wardens and makes various demands, protesting her unlawful incarceration. However as the story develops we watch in horror as she is systematically broken down to become a whimpering shadow of her former self.

Notions of fascism, oppression, psychosis and a social system Walker aligns with the criminals it judges, infest every scene as the director condemns those who see themselves as purveyors of justice. House of Whipcord is the director’s expose of a culture that now, as then, is almost always far too quick to condemn. All of this is presented in the grainy excesses of an exploitative exercise in pure sadism – one which viewers won’t escape easily from. Nihilistic and bleak, House of Whipcord is one of the director’s most dank and gruelling films to endure. At times the tension is suffocating, particularly in the scenes when Anne-Marie attempts her escape and for the brief while things seem to be going her way… The various torture scenes also strike a pretty gut-wrenching blow and are as frequent as they are effective. Amongst those dealing out the barrage of floggings and psychological torture is Walker regular Sheila Keith (Frightmare). Whilst obviously relishing every moment of her screen time, Keith is rather akin to the likes of Price and Karloff, in that she is able to impregnate an obviously deranged character with a distinct underlying pathos, which greatly adds to the disturbing aura of the film. 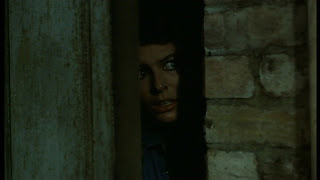 It is interesting to note just how well Whipcord holds up compared to certain similarly themed films today – I’m thinking along the lines of Hostel, Saw et al. While it was shot on a remarkably low budget, contains some uneven acting and couldn’t possibly compete with today’s sophisticated special effects, House of Whipcord has at its heart a compelling story around which swirls a plethora of ideas concerned with authority, the penal system, human rights, prisoners’ welfare and free will. When viewed in this context, Whipcord wields an uncanny power and still feels completely relevant today.

When it was initially released, Whipcord launched a scorching assault on the BBFC, and encapsulated Walker’s preoccupation with out of control authority figures, generation gaps, morality and sadism. In retrospect it serves as a fitting allegory about censorship and the Mary Whitehouse regime (Whitehouse campaigned for the Christian values of morality and decency and constantly attacked the media for their ‘corruption of the youth’) – a satire of Britain’s right-wing who wished to see the return of capitol punishment. The satirical nature of this film is obviously lost on those who kicked up such a fuss about the film when it was released.
In fact, Walker dedicates the film “to those who are disturbed by today's lax moral codes and who eagerly await the return of corporal and capital punishment". An ironic statement of course, as it is these very people and their extreme views Walker is scrutinising and undermining. 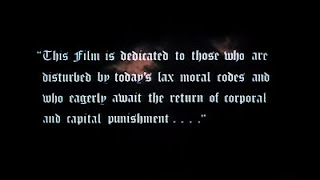 House of Whipcord is a deliciously dark, violent and provocative slice of vintage British Horror. It manages to retain its cutting edge thanks to Walker’s no frill’s direction, and a gripping, disturbing and potent story that seethes with burning issues and shark-eye wit.
British Horror Exploitation House of Whipcord Pete Walker Seventies Horror Sheila Keith Social Commentary Socio-Political Commentary Women in Prison

Anonymous said…
I love this film.
I think it's because, as you point out, it is still relevant and holds up so well.
Wonderful review as per usual!
20 October 2009 at 00:49

I Like Horror Movies said…
Agreed, it is very nasty at heart, and it serves as my favorite Walker film. Thanks for another poignant review!
21 October 2009 at 05:22

James Gracey said…
Cheers guys. I reckon its down to the script he co-wrote with David McGillivray - I think his best films were the ones he worked on with this guy. Biting social commentary that would make George Romero a little envious!
21 October 2009 at 10:44