The Gay Bed And Breakfast Of Terror 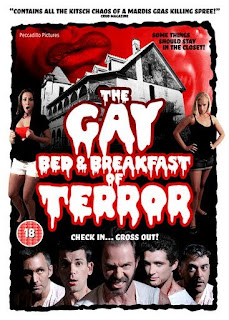 Making their way to the biggest LGBT Festival of the year, five couples stop over at a creepy hotel for the night - unaware that the proprietor is a God-fearing homophobic Republican intent on whittling down their numbers. Mainly by feeding them to her cannibalistic mutant son Manfred...

To call The Gay Bed And Breakfast Of Terror 'trash' would be stating the obvious. This is not a subtle film. It is cheap, exploitative and more than happy to wallow in its own mire of perverse charm. The title alone should alert you to what to expect, really! Which in a nutshell is Mommie Dearest-theatrics, George Bush-baiting jokes, complete irreverence and the deployment of every gay stereotype to increasingly hysterical effect. Kind of fun in a schlocky, dreadful kind of way.

Mykal said…
James: If you're going to go camp, don't piss around. Go CAMP. I want to see this film simply because it seems (by your very clear, concise review - not being paid by the word on this one, eh, James?) that it seeks to do one thing and do it completely: Fun trash, right? -- Mykal
16 October 2009 at 13:01

James Gracey said…
Indeed Mykal. Though I felt it could have been MUCH trashier! Then again, perhaps I'm just a sick puppy. Would love to read your thoughts on this one when you get a chance to see it, Mykal. Hope you are well and enjoying your weekend.
17 October 2009 at 19:08