The Ballad of William Bloat 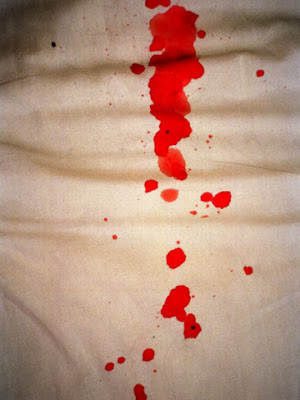 In a mean abode on the Shankill Road
Lived a man named William Bloat;
He had a wife, the curse of his life,
Who continually got his goat.
So one day at dawn, with her nightdress on
He slit her bloody throat.

With a razor gash he settled her hash
Never was crime so slick
But the drip drip drip on the pillowslip
Of her lifeblood made him sick.
And the knee-deep gore on the bedroom floor
Grew clotted and cold and thick.

And yet he was glad he had done what he had
When she lay there stiff and still
But a sudden awe of the angry law
Struck his heart with an icy chill.
So to finish the fun so well begun
He resolved himself to kill.

He took the sheet from the wife's coul' feet
And twisted it into a rope
And he hanged himself from the pantry shelf,
'Twas an easy end, let's hope.
In the face of death with his latest breath
He solemnly cursed the Pope.

But the strangest turn to the whole concern
Is only just beginning.
He went to Hell but his wife got well
And she's still alive and sinnin',
For the razor blade was German made
But the sheet was Belfast linen.